A Chicharito goal, finishing off an excellent piece of play between Cristiano Ronaldo and James, earns Real Madrid, who were superior throughout the tie, a place in the semi-finals.
Santiago Bernabéu

0
The reception Real Madrid were given on their arrival to the stadium was an indication that it was going to be a huge night. And it was. The goal came in the dying minutes but it was a fair result for a team that were superior throughout the tie and took to the pitch in domineering fashion. In complete control of the ball, the Whites pegged Atlético back into their own half and were also able to recover possession extremely quickly.

Ancelotti started with Ramos alongside Kroos in the centre of midfield and it was one-way traffic during the opening twenty minutes of the game, with the home side creating two goalscoring opportunities. Carvajal swung in a cross in the 11’ but Chicharito's resulting volley went straight into Oblak's hands. Cristiano Ronaldo was the man behind the second effort, but his left-footed strike from outside the box was deflected wide in the 14’.

Clear chance
The minutes ticked by and things remained all square. Cristiano Ronaldo once again tried to break the deadlock but his free kick in the 32’ was knocked out for a corner by Oblak. The home team hounded the visitors once again during the final ten minutes of the first half and it was during this spell that the clearest chance of the game up until that point was carved out. Carvajal robbed the ball off Saúl, linked up with James and the Colombian's defence-splitting pass in the 44’ set Cristiano Ronaldo up with a one-on-one situation with the Atlético keeper, who saved his team's blushes yet again.

The second half was a similar story, although Real Madrid came out with the intention of circulating the ball even faster. The game remained scoreless, despite the fact that by the 55th minute the Whites had recorded eleven shots on goal compared with their opponents' two. Their twelfth attempt came four minutes later, but Varane's header from a Kroos corner failed to find its way past the keeper.

Oblak keeps it scoreless
The Whites, who had created enough chances to score numerous goals over the course the tie, continued to bombard Atlético's goal. A Cristiano Ronaldo cross in the 62’ found Ramos, but his header was dealt with by Oblak. Arda was sent off a quarter of an hour later after receiving a second booking. With 14 minutes of regulation time left, and with an extra man on the pitch, the Whites came close to making the most of the situation immediately but once again Oblak was at hand to deny Chicharito in a one-on-one situation in the 80’.

A goal at last
The Madrid players could not have been any more determined, while their opponents shrunk further and further into their shells. And then the deserved reward finally came. Cristiano Ronaldo started the move. The Portuguese star had a one-two with James, burst into the box and laid the ball up Chicharito who tapped it into the back of the net. It was the only goal of the night and the tie. Real Madrid are through the semi-finals for a fifth straight season. The fans, spectacular throughout the match, deserved this result. The team's next rivals will either be Barcelona, Bayern or Juventus. 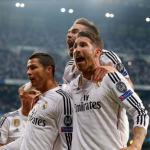