It is Real Madrid's oldest fan club. It was founded in 1920 by Mariano Herrero and the current president, Jesús de Lucas, recounts the tales he still holds dear from that time.
September 1920. The El Nido bar, on the Madrid street of calle Mesón de Paredes. A group of football fans chat about the Whites and decide on creating a fan club to support and cheer on their team wherever they find themselves. And that bar would be their headquarters. “Madrid players, the Marquis of Bolarque and numerous journalists and fans, my among them my father-in-law Mariano, would meet up in that bar. One evening while chatting with his friends there, they decided to create a fan club to support Real Madrid", tells Jesús de Lucas.

Mariano was a bull fighting aficionado but Real Madrid awoke his passion for football: “He went to all the games. He wore his normal street clothes on the way to the stadium but he changed into his Madrid attire once he got there. If the team lost on a Sunday, he wouldn't get out of bed until Tuesday... And when they won, we would make our way to the fan club to celebrate the victory”.

Jesús de Lucas, seventh president
The fan club started out with 100 members. The statutes have never allowed that number to be surpassed. To be a member of the club you had to be a Real Madrid member as well. There are currently 22 members. The oldest is 98 years of age while the youngest is 21. Jesús de Lucas has been a member for 60 years and is the seventh president in the club's history. The name of the club's headquarters changed to Casa Mariano in honour of the club's founder in the 1940s. In the 1960s it was moved to its current location, in the Tirso de Molina square.

Jesús de Lucas looks back nostalgically “to when there weren't televisions in every home. We set ours up in the door of the bar and the square filled up with people. Whenever we won a European Cup we would provide massive drums of lemonade for everyone to drink from".

“And when matches still weren't being broadcast on radio, we would write the results up in the doorway of the bar and loads of people would come by to check the scores and see how they had got on in the pools”.

If there is one thing this resident of La Alcarria can claim, it is that he has lived through everything. He has witnessed 32 La Liga campaigns and the 10 Champions League wins by the team of his heart. "Our first trip abroad was to Paris in 1956 to see the final of the first European Cup. It was unforgettable", he states. "I remember that on another trip during the sixties we went to London and we missed our return flight, we had to spend the entire night sleeping on the airport floor".

He also recalls trips around Spain: "We went to Bilbao when Zarra, Venancio, Panizo and Gaínza were playing… We stayed with the fan clubs of rival teams and they treated us really well. When they came here we returned the hospitality. The bar stayed open all night. We always had a really close relationship with all of the fan clubs".

Santiago Bernabéu and Di Stéfano visited the fan club.
“One day we travelled yo Valladolid with more than 30 buses and an ambulance in case anything were to happen...On another occasion, a gas bus left us waiting in El Alto de los Leones..." He jumps from one story to another and could carry on for hours. He has a lot to tell about the years during which he shared so much with so many. Among these people were his idols: "Many footballers would drop in at the fan club. They were very close. Alfredo Di Stéfano was one of the players who visited. I view him as Madrid's best player ever. Santiago Bernabéu also visited. He was very good friends with my father-in-law Mariano, they were like brothers and I have great memories of him".

Jesús de Lucas thinks it is a shame that they no longer share as much as before, because aside from trips, they spent many afternoons in the bar "having a coffee and playing card games". Now, 10 or 15 fans only meet up once a month to chat about the team. They also celebrate the club's birthday and sell Christmas lottery tickets: "We make a small amount that is then donated to charitable causes. In the past, the charity money was used to bring children from a school and an orphanage and we gave them breakfast and toys".

If the president of the Mariano Fan Club is sure of one thing, it is that the group will continue to write further history and have good times: "Whilst I am alive, we will be here serving and supporting Real Madrid. When I can no longer be in charge, my son will take over, he is another lifelong Real Madrid supporter".

How to set up a supporters clubMore information 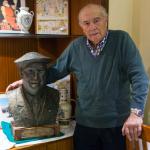