Khedira played his 150th match for the Whites and Illarra obtained his 50th win.
Karim Benzema made his 250th appearance for Real Madrid in Granada. The striker scored the third goal of the match and has now racked up 120 as a Real Madrid player. The French player, now in his sixth season with the Whites, made his debut on the 29th August 2009 against Deportivo at the Bernabéu. Benzema has played 167 La Liga matches, 48 in the  Champions League, 28 the Copa del Rey, 6 in the Spanish Super Cup and 1 in the European Super Cup. He has notched up 180 victories and six titles as a Real Madrid player.

150th match for Khedira
The German came on as a substitute for Modric in the second half and made his 150th appearance for Real Madrid. This year Khedira became the second German player to have reached five seasons as a Real Madrid player. He is beaten only by Stielike, who played for the Whites over eight seasons. His debut for Real Madrid took place in August 2008, during a league trip to Mallorca (0-0).

Illarra, 50 wins
Asier Illarramendi also reached a milestone against Granada: his 50th victory as a Madrid player. The first was his debut in the Champions League on the 17th September away to Galatasaray. The Basque central midfielder from has obtained 28 victories in La Liga, 12 in the Champions League, 9 in the Copa del Rey and 1 in the European Super Cup. 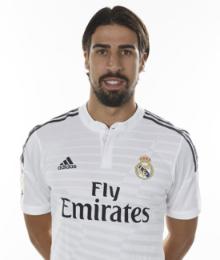