“We’ve lost a great man”, said Casillas when he visited the open casket.
Since the doors were opened to the public viewing, Florentino Pérez, Emilio Butragueño and Real Madrid veterans of football and basketball accompanied Di Stéfano’s family. First-team players Carvajal, Casillas, Sergio Ramos and Nacho, and members of the Board of Directors visited the Santiago Bernabéu to bid farewell to the best player in history.

Casillas: “To speak of Di Stéfano is to speak of Real Madrid”
"Don Alfredo was very important for Real Madrid and for those of us who coincided with him. We became a lot closer in recent years, we spoke a lot when we coincided at events and meals. He told anecdotes and would ask how you were… He had a wonderful ease. We have lost a great man”.

“For those of us who have been at the club from a young age, to speak of Di Stéfano is to speak of Real Madrid. The figure of Don Alfredo, his images, his goals… everything reminds you of Real Madrid. In his generation that courage, determination and fury began to rub off on the player s that arrived each decade".

Nacho: "He is a symbol"
"For the academy players and the rest of the Real Madrid players, Don Alfredo is a symbol of sacrifice and hard work for the badge. It is an enormous honour to have spent my day-to-day with him. He was a very friendly person who loved to joke around".


Along with a large number of old Real Madrid teammates from his time as a player and coach, ex-presidents Lorenzo Sanz, Fernando Martín and Vicente Boluda also attended the public viewing.

Butragueño: “His legend will live forever”
“We thank all the institutions, clubs and people who have come here to show their support on this sad day. Real Madrid is what it is today because of Alfredo Di Stéfano. Our gratitude is eternal and his legend will live forever. He gave me my first chance with the first team and I had a fantastic personal relationship with him. I owe him a lot”.

Real Madrid veterans
Hierro: "He will always be a role model to Real Madrid players. He embodied this club's values". Camacho: "He wrote Real Madrid's history”. Pirri: “Madrid is a family and we have lost our eldest brother”. José Vicente Train: "I am deeply saddened by the loss of a great teammate and a fantastic player”. Romay: “The Real Madrid of his time changed football". Emiliano Rodríguez was also in attendance.

Seedorf sent a farewell letter: “Dear Don Alfredo, having changed the history of football thanks to your incredible talent, now it is time to say goodbye to you. Thank you for the eternal mark you left on the glorious club that is Real Madrid, where I had the honour to play. Your legacy will always be remembered in the hearts of all Real Madrid fans”.

Gento: “He was a one-off player. He arrived at Madrid very young and to me he was a master, I learned a lot from him. I had never seen anyone play like him before”. Pachín: “He was the number one and a born winner. He showed you how to be on the pitch". Quique Sánchez Flores: “He changed history. He was the first genius to work as a pawn and that makes him even more special". Víctor Sánchez: “He gave me some very important advice in my career".

Sanchís: “As a coach he had a lot of courage and he brought about La Quinta del Buitre. He became a legend in his lifetime and he is now in the hearts of all Madrid fans”. Martín Vázquez: “He was the best on the pitch but always helped the team”. Chendo: “He is an example to all the boys in the academy. He is the greatest in the club’s history and everyone should learn a lot from him”. De Felipe: “He invented total football, he attacked, he defended, he ran and scored goals”. Rubiñán: “He was always smiling. He was a genius and a figurehead”. 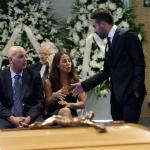