“He was a one-off, a great among greats”, declared the monarch.
King Felipe VI also visited the Santiago Bernabéu to bid farewell to Alfredo Di Stéfano: “First, I would like to pass my condolences on to his family, to the Real Madrid family, to the club and to the whole of Spanish football. He is a one-off, who made football into an art. He was an extraordinary personality and has our eternal admiration and gratitude. A great among greats”.

The King, who was welcomed by Florentino Pérez in the president’s box, paid tribute to the man who changed the history of Real Madrid and passed his condolences on to his family. Before leaving the public viewing, he signed the book of dedications. 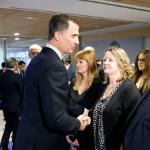