The fans filled the stadium to celebrate winning the Tenth with the players.
After the great support they received in Lisbon and at Cibeles, the Madrid fans did not want to miss the opportunity to thank their team for the title and they enjoyed celebrating the Champions League alongside the footballers at the party.

Spectacular ceremony on the field
The celebration began with the Centenario anthem, after which, with the stadium in darkness, the 10 European Cups won by the club were shown on big screens. After presenting the club's new song, Hala Madrid y Nada Más, Ancelotti was the first to be introduced and to appear on the field under a spectacular display of light and sound.

Fireworks
They all climbed onto the platform located at the top of the screens where they lifted the Cup while fireworks with We are the Champions in the background made the crowd go wild. The players thanked the fans for their support and together with the manager they sang the new song written by RedOne.

Return to the field
They then went down onto the turf to do a lap of the stadium and offer the title to all the Whites' fans, who had the time of their lives. The footballers showed all their joy and shared the moment with the coaching team and their families. The ceremony ended with a big family photograph. 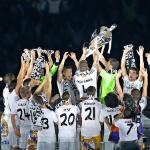