The trophy is now on display in the 'Kings of Europe' room, together with the other nine European Cups.
Florentino Pérez personally carried the Décima to the Bernabéu Tour. Real Madrid's president placed the trophy alongside the other nine European Cups in the trophy cabinet housed in the Kings of Europe room. It is a unique and striking place with a show of lights, audio and confetti that will thrill any Madrid supporter.

Whites fans can now enjoy the title won in Lisbon and have their photos taken with the 10 cups that make Real Madrid the best club in the world. The room is the centrepiece of the Bernabéu Tour. Opposite the trophy cabinet that holds the cups is an 18-metre screen with an audiovisual display that allows visitors to uncover commemorative objects and take a look back at the ten titles. 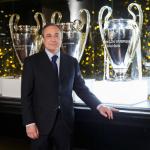