Around 70,000 people flocked to enjoy the champions' party with the players.
Real Madrid fans flocked to Plaza de Cibeles to celebrate the 19th Copa del Rey won at the Mestalla against Barcelona. Over 70,000 Whites' supporters gathered on the square in central Madrid and revelled in the title earned by Carlo Ancellotti's team. The statue of the Goddess was surrounded by a colourful crowd as hundreds of Whites' fans waited with anticipation for the arrival of their team.

A few minutes after the match ended at the Mestalla the first Madrid supporters were already gathering on Cibeles chanting "Campeones, campeones!" ('Champions, champions!'). Real Madrid scarves, shirts and strips filled the square with colour and atmosphere as the crowds sung to celebrate the first title of the season. "Así, así, así gana el Madrid" ('Like that, like that, like that, Madrid wins') and "Sí, sí, sí, la Copa ya está aquí" ('Yes, yes, yes, the Cup is here'). A white banner with the slogan "Campeones" was wrapped around the monument.

Spectacular atmosphere
The music from the PA livened up the crowd while they waited for the footballers and they even heard the Real Madrid anthem sung by Plácido Domingo. The City Hall, located on the square, was lit up on its main façade with a moving Real Madrid badge, a silhouette of the Copa del Rey trophy and two messages: "Hala Madrid" ('Come on Madrid') and "Gracias madridistas" ('Thank you Madrid fans').

The highlight of the celebration arrived at around 4:10, when the Whites squad appeared on the open-top bus with the slogan "Campeones Copa del Rey". The players climbed up to a platform set up around the Goddess where they danced and sung, cheered on by the thousands of supporters who chanted their names.

The moment everyone was waiting for
The Real Madrid captain, Iker Casillas, offered the Copa to the thousands of fans in attendance and put the flag on Cibeles to bring the celebration to an end, to the sound of We Are the Champions. Another unforgettable night that will go down in Real Madrid history. 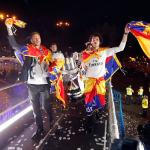