Doubles from Benzema, Bale, whose first was an absolute beauty, and Cristiano Ronaldo mean that a place in the quarterfinals of the Champions League is all but sealed.
Veltins-Arena

6
Real Madrid took their outstanding form into Europe and all but secured a victory in their round of 16 Champions League tie. If anyone doubted that this side were not capable of winning in Germany, they answered them emphatically with six goals. The match went in Madrid's favour from early on. They only needed 13 minutes to open the scoring. Cristiano Ronaldo played a one-two with Bale via a back heel, and the loose ball fell to Benzema, who did not miss one-on-one. Schalke had the chance to draw level in the next play, however Casillas' reflexes denied them. It was a great save from the Madrid captain who left the Veltins-Arena crowd, who were almost celebrating Draxler's strike, stunned.

The match started vibrantly and Bale's super striker in the 21st minute made it even more so. If the Welshman surprised everyone on Saturday with a thunderbolt from 30 metres, this time he capped off a fine move that will be remembered for a long time. Benezma intelligently robbed the ball from Santana and he played it to the man from Cardiff, who danced around two men before beating Fährmann. There could have been a third after half an hour of play, but Cristiano Ronaldo's effort from the edge of the area crashed against the post.

Madrid were able to close off their opponents and continued to create the clearest openings. Cristiano Ronaldo tried again in the 36th minute, but the home side's goalkeeper did well. It was not the last effort of the first half - there was time for two more. The first fell to Benzema, who fired over from the penalty spot in the 43rd minute, whilst the second fell to the world's best player, who was unable to beat Fährmann from inside the box.

Cristiano Ronaldo deserved to score and his first goal came in the 52nd minute when he finished off a counterattack in marvellous fashion. He received the ball on the edge of the area, running at the opposing defence he breezed past Matip with a step over before finishing with his left foot. Five minutes later the fourth, and Benzema's second, was scored. Cristiano Ronaldo laid the ball on for the Frenchman who calmly rounded Fährmann and scored.

Benzema was not the only player to score twice. Bale did not want to miss out and scored his side's fifth goal. Ramos recovered the ball in the 69th minute, and played a deep ball in behind the home side's defence. The Welshman did the rest. Given there's not two without three, Cristiano Ronaldo's turn came in the 89th minute. The Portuguese goes ahead of Ibrahimovic as the competition's top scorer with his side's final goal of the evening in what was the largest victory margin in the round of 16 in this season's Champions League. Huntelaar scored Schalke's goal in injury time. 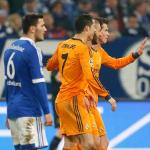