Home-grown and a Madrid fan, he represented better than anyone Real Madrid’s winning mentality. His impetuousness made him fight until the final whistle. He was a racial centre forward, an excellent header on goal, as well as a tireless worker that was very dedicated and a fighter. He had an excellent right foot, which he exploited to the fullest with many goals.

Juan Monjardín was forged in the youth teams of Colegio de Nuestra Señora del Pilar, home to great footballers. At the time he was a regular at the games that the Whites played at the Duque de Sesto football field. This is how Bernabéu remembered him: “He was right behind the goals, gesticulating and screaming at the players, with messages of support, he was tireless.” That is how he would also be on the pitch.

His signing represented new blood to a team that was going through a generational renewal with the departure of Sotero Aranguren, Teus or Erice. He arrived together with González, Peris or Hernández Coronado, who always looked up to him as an example. His ambition was contagious. He was a leader on the pitch, someone to turn to when the result was bleak. Monjardín was always there, pushing the team to get back into the game and overturn the result. That was his greatest legacy for subsequent generations.
The Galician forward won four caps with the national side, and received the Medal for Merit in Sports from the National Delegation for Sport. He died in a tragic traffic accident on 3 November 1950. 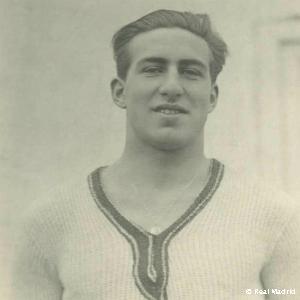