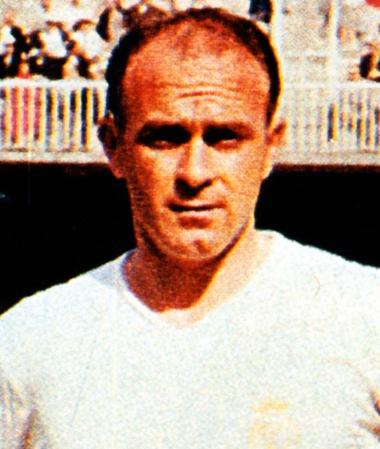 The best footballer of all time

The best player in the history of Real Madrid. He could attack, defend and play well everywhere. He was a leader on and off the pitch and with him the Whites reached the peak of their football glory: the as yet unrepeatable feat of winning five consecutive European Cups which amazed the international football world. Di Stéfano was awarded the Ballon d’Or in 1957 1959 in recognition of his performances and those of this dream team. Also, he is the only player in the world to own a Super Ballon D'Or. In 1989 he received the trophy, that can today be found in the Real Madrid Museum.

At the age of 19, he made his debut at the top level for River Plate and when he was 21 he won the Argentinian league and was the top scorer in the competition. A general strike in Argentinian football led him to emigrate to Colombia, where he would triumph playing for Millonarios. The football played by the Saeta Rubia (Blond Arrow) captivated everybody and Real Madrid and Barcelona fought hard to sign the best player of that era. Eventually, the Whites managed to sign this most prized asset.

The only word in Di Stéfano’s dictionary was ‘win’. His entire career at Real Madrid was full of success. Eighteen trophies in eleven seasons and 308 official goals made him a symbol of the club and the idol of the fans. His performances in the European Cup Finals were particularly memorable as he scored at least one goal in all of them.

Real Madrid absolutely dominated Spanish and European football at the time and their game revolved around the majestic figure of Alfredo di Stéfano. He took Spanish nationality and played for Spain 31 times, although he never played in the final stages of any international tournament.

The Godfather of the ‘Quinta del Buitre’ (Vulture Squadron)

As a coach, Di Stéfano showed the way to a generation of players who would go on to make their mark at the club. Butragueño, Sanchís, Martín Vázquez and Pardeza became first team regulars while the Argentinian was coach there and Michel would do so shortly afterwards with Amancio.

He started his coaching career at Boca Juniors, where he won the Argentinian League and Cup. He then returned to Spain to take over at Valencia, where he won La Liga in 1971. After coaching spells at teams such as Sporting Lisbon, Rayo Vallecano and Castellón, he went back to Valencia where he led them to victory in the UEFA Cup Winners’ Cup in 1980.

In 1982, he started his first period as coach at Real Madrid, and in two seasons he reshaped the team and saw them finish as runners-up in five competitions. In November 1990, he took over from John Toshack. This time he stayed as first team coach for five months which was long enough to win the Spanish Super Cup against Barcelona. This was how the man who was the club's honorary president until his passing on 7 July 2014 left his mark. 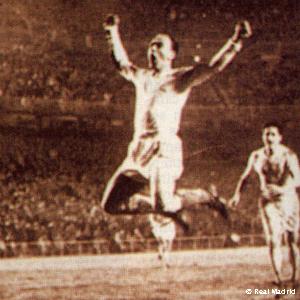