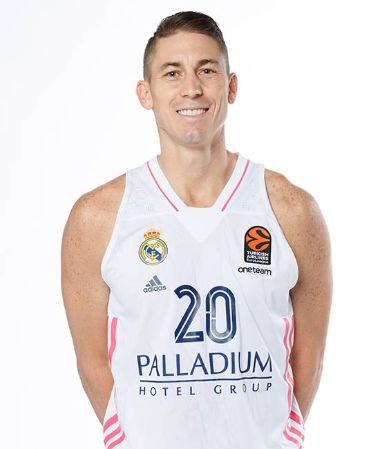 The foreigner with the most appearances in Real Madrid's history

The American is one of Real Madrid's biggest legends. He left his mark on an era under Pablo Laso, winning 20 titles in 10 seasons: 2 Euroleagues, 1 Intercontinental Cup, 5 Leagues, 6 Copa del Rey and 6 Supercups. A highly successful decade that saw him become the foreigner to have made the most appearances for Real Madrid (709).

Carroll made a lasting impression at Real Madrid, the source of unforgettable moments. His 11 consecutive points in the third quarter of the 2015 Euroleague final in Madrid, that finally brought us La Décima, as well as his three-pointer with one second on the clock in the fourth game of the 2019 ACB playoff final, will always remain in our memory. A player with different characteristics, an unstoppable scorer, one of Europe's best shooters of all time.

Carroll has the third most appearances in the history of Real Madrid behind Felipe Reyes and Sergio Llull. After arriving in the 2011/12 season, he went on to become one of the five fundamental cornerstones of one of the golden eras of the basketball team along with Laso, Llull, Rudy and Reyes, culminating in the incredible 2014/15 campaign and La Undécima in Belgrade in 2018.

He established his place among the best, both in the ACB and the Euroleague. Playing 461 league games (389 for Real Madrid and 82 for Gran Canaria). He became the foreigner to have played the most games with the same team in the Euroleague (274), leading in free throw shooting percentage in 2018/19 with 96%. A truly unique player who has always given Real Madrid fans a lot of pleasure.