“The most brilliant point guard”

Born on the Day of the Epiphany, Carmelo Cabrera was a real treat for Madrid’s fans. The Canary Islander made his way into the hearts of basketball lovers offering limitless creativity. He contributed to one of the club’s most fruitful eras. With him the team won 10 ACB League titles in 11 seasons, and two more European Cups (the fifth and sixth).

Pedro Ferrandiz took him to Madrid to transform him into an ideal second point guard, all intuition and intelligence. He was the dynamite used to unblock games. He had an innate quality when it came to handling the ball. He offered a different type of basketball that justified the absence of important physical qualities. Few were more generous. “All my team-mates are better than me”, was the sentence that summed up his personality.

Fans throughout Spain and Europe applauded him, bowing to his commitment with putting on a show. He played with the continental team, as well as gaining over 100 caps with the Spanish national side, winning the Eurobasket silver medal in 1973. 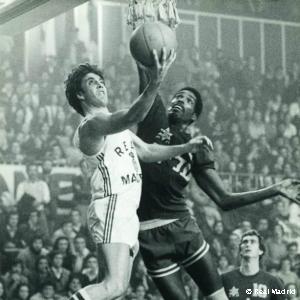