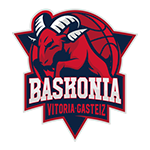 A very tight match at the Buesa Arena, won in the final seconds by the home side.

Real Madrid suffered their first league defeat on their visit to the Buesa Arena in round five. After a strong first quarter from our side, the hosts turned the game around to take a 9-point lead at half-time. Chus Mateo's men cancelled out the lead in the third quarter to go into the final quarter all square, but Baskonia came out on top in the last few seconds, where they were more clinical. Yabusele, Deck and Tavares were the highest scorers for Madrid (20 each).

Real Madrid began the game in confident fashion with a 2-11 run in the first four minutes, but Baskonia responded quickly with their best qualities, which are speed and three-point shooting. That combination saw them take a 14-15 lead after 8 minutes. In spite of the onslaught, our team kept their heads clear and continued to strike from the paint with Deck (7 points), Tavares (6) and Poirier (4). The French centre's two free throws put our team 7 points up at the start of the second quarter (14-21).

Madrid strong on the paint
Our team suddenly stopped playing inside and this hindered them enormously, because they lacked outside shooting. Their opponents had plenty, and they gradually grew in confidence until they took control of the game. Hommes (9 points) led his team to an important 20-9 lead, establishing the largest difference in their favour in the 17th minute (34-25). Chus Mateo's men returned to their game near the Baskonia hoop, where they had had significant dominance at the start, and managed to curb the home side's surge before the break to leave the deficit at 4 points (37-33).

It was more frantic start to the second half. Baskonia's play was focused on their success from three-point range, but they weren't making them like before. Madrid were hurried in attack and couldn't quite catch up with their opponents. It all changed from the 26th minute onwards. Chus Mateo's men shut down the rebounding and went on the counter-attack. Points began to come from both inside and outside. Musa, with 9 points, led a 5-17 run, in which Tavares, Cornelie, Deck and Llull also chipped in. A three-pointer from the captain, 883 in the ACB making him the sixth highest three-pointer in history, overtaking Perasovic, saw our team open up an 8-point lead at 50-58, in a third quarter that we won 18-25.

Another close finish
Baskonia continued to play their game. Another flurry of three-pointers in the final quarter, with Hommes, Giedraitis and Costello leading the way, propelled them into the lead. Madrid withstood the home side's onslaught thanks to Yabusele. The power forward was Madrid's attacking force in the toughest minutes of the game. He scored thirteen consecutive points to offset those of the visitors, who went into the final minute 81-79. The home side then showed more accuracy and, with a 7-3 run, took the win 88-82.