“In the seven years I spent away, I understood the greatness of Real Madrid. It's just infinite”, said the club legend.

Raúl González Blanco was the latest star to be involved in the Real Madrid Universidad Europea School's White Week. At the event chaired by Emilio Butragueño, the current Real Madrid Castilla boss reflected: “I came here at 15 years of age, full of hope, ambition and a desire to discover what Real Madrid meant. From the first day I arrived at the training complex I could feel the values of this club but when you live with them every day you don't realise the impact Real Madrid has outside of Spain. In the seven years I was away, I understood the greatness of Real Madrid even more so. It's just infinite”.

“These Champions League knock-out ties are a great example of what Real Madrid is. People were convinced we could pull it off and that bring a special energy. It's not a question of luck, because luck doesn't exist. What exists is the legacy left by all the people who have come through here. It's something that lies in the spirit of all fans", said the madridista legend.

His role as coach
“Coming back to Real Madrid in a coaching role is a way of giving back to this club for all it has given me. It makes me feel good to be coaching lads who I hope one day can end up in the first team. It's hugely rewarding work but I suffer through it too because once the game starts, you just have to hope the team has understood what you've been working on during the week. It's a lot more lonely but it's exciting too. Right now, I value the Youth League we won in 2020 with the European Cups I won as a player”.

Video.“In the seven years I spent away, I understood the greatness of Real Madrid. It's just infinite”, said the club legend.

“The thing we talk about least in the dressing room is the result, although we understand our responsibilities when we pull on this jersey. I always ask them to fight in every game, give it their all and show commitment. The rest, win or lose, is part of the process. We're going to keep battling to get into the playoffs, but we're proud to have several players who have already made their first-team debuts”, added the coach.

FIFA and football as a global phenomenon
FIFA's Under-Secretary-General for Football, Mattias Grafström, was another of the speakers on day four of White Week and he took questions from the students: "Football's doors are open for everyone around the world. The simplicity of the game is what makes it so universal. We work hard to make it increasingly global and to take advantage of the social impact. using it as a tool for progress, learning in victory and defeat and respect. This allows us to implement programs that intertwine football and education”.

“Real Madrid are the only club involved in founding FIFA. We share values with them such as respect, solidarity and inclusion. A World Cup is an event where the things that matter go well beyond events on the pitch, for FIFA it's important to use these kinds of events to drive progress in the host nations. Qatar was picked to host this World Cup 12 years ago and has had a long time to prepare the stadiums, accommodation, transport in the city, improve safety... There are many areas to work on and we, as an organisation, work shoulder to shoulder with the host nation”.

Real Madrid Foundation
Julio González Ronco, managing director of the Real Madrid Foundation, chatted to the students about the Foundation's efforts: “It's nice that a brand like Real Madrid can be used as an asset for the three fundamental pillars of the Foundation, which are, education, cooperation in development and inclusion for vulnerable groups through sport. Just like football, our Foundation is about passion and emotion. We have over 600 projects in 82 countries through which we strive to improve the lives of those most vulnerable and provide an education in values”.

Israel García, Real Madrid's director of Digital Strategy, and Carlos Sánchez, the club's Head of Product, were also involved in this final day of White Week, focussing their participation on the creation of unique user experiences for fans. 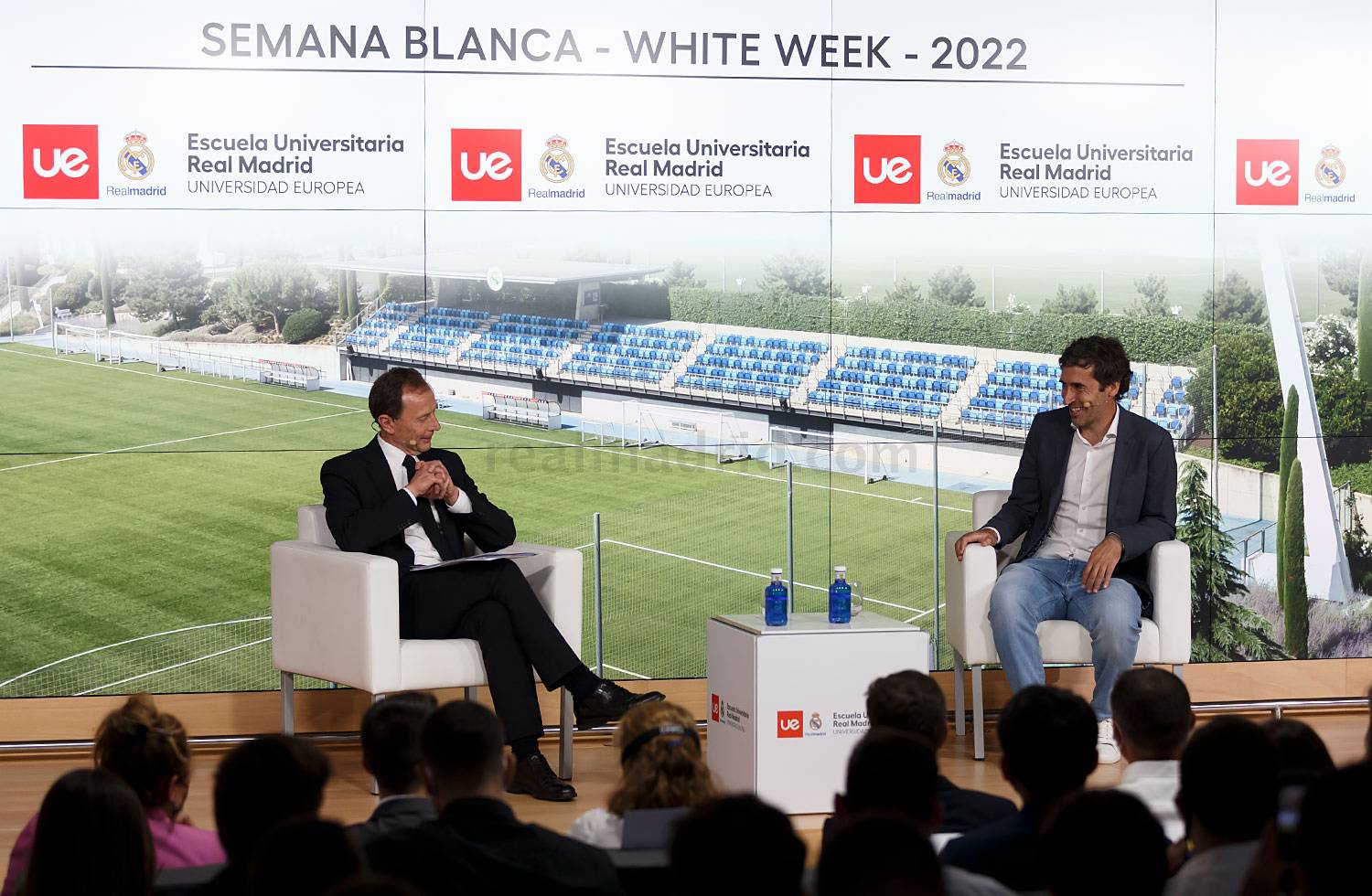 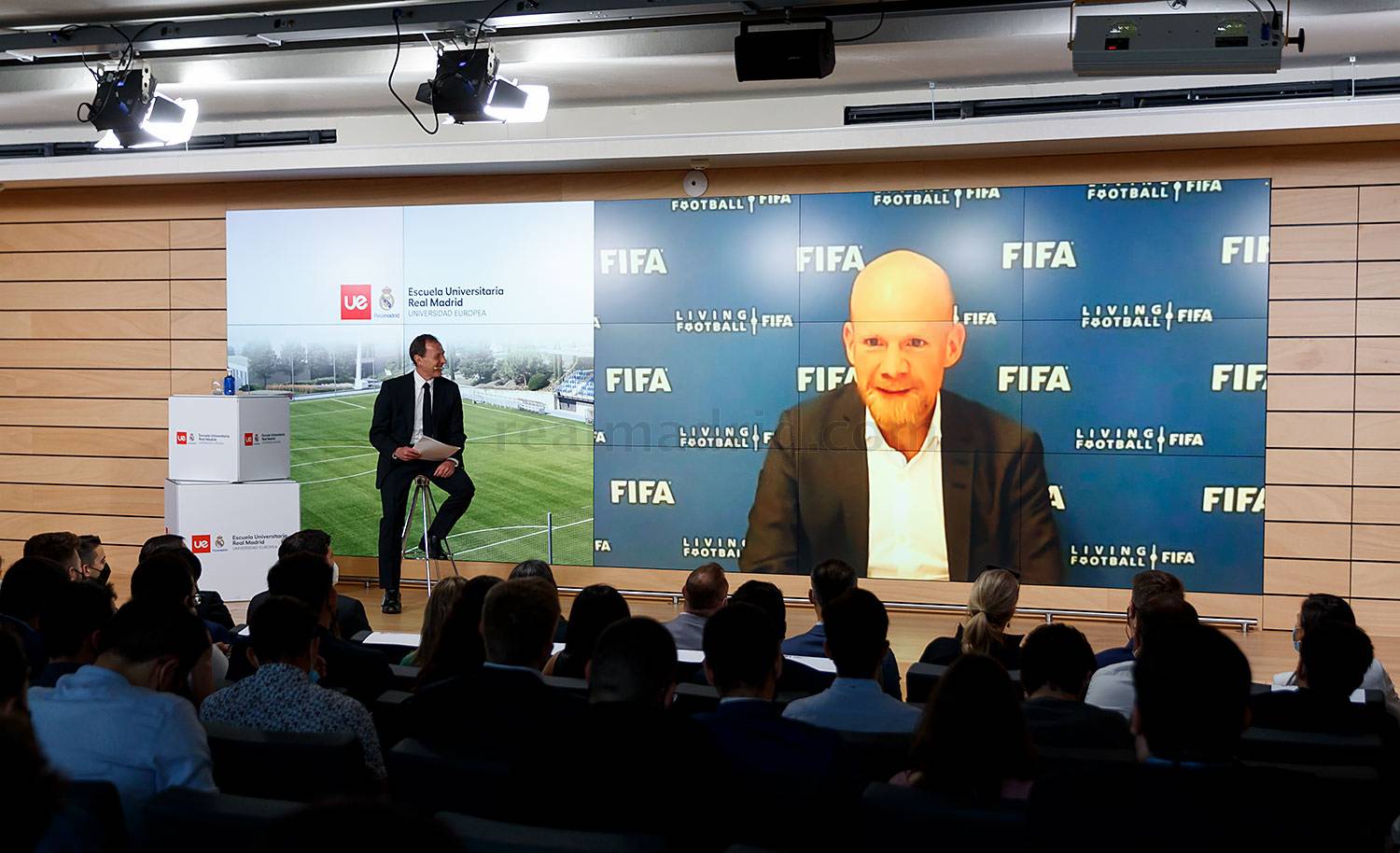