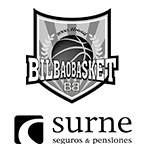 Laso's men were unable to best the Basque team's solid defense on Endesa League matchday 19. Llull was the madridistas' standout performer with 22 points.

Real Madrid lose the game on their visit to the Bilbao Arena. Our team were unable to take a twelfth away win in the postponed matchday 19 Endesa League clash. Llull posted 22 points as the madridistas' top performer. Next up, the Whites take on Río Breogán at the WiZink Center on Sunday (12:30pm CET).

The Bilbao Arena paid tribute to Álex Mumbrú, former Real Madrid (2002-2004 and 2006-2009) player and the Baseque side's coach, in the build-up to the game. Madrid were up on the scoreboard with 5 minutes gone (8-11) as Deck was on point (5 points, 2 rebounds and an assist). But the hosts wasted no time in hitting back from the three-point line to turn the numbers around (17-11). Laso's boys improved in the final two minutes thanks to the introduction of Llull, but Bilbao took the quarter (22-18) following Inglis' dominance in the paint.

Evenly-fought
Mumbrú's team looked comfortable on the court and were taking advantage of every visiting turnover. However, Llull began to find his range from three (10 points) to take his team level thanks to an 0-11 run. The madridistas turned to Causeur, Tavares and Randolph, as they managed to build up another four-point advantage. Then, the hosts pushed on once more and Goudelock and Inglis made sure they would head into the break in the lead (45-41).

The third quarter began much the same as the second. Bilbao Basket upped the intensity in defense and Masiulis, Rousselle and Walker stormed to a 12-1 run (min. 24). The madridistas' accuracy deserted them and the Basques took advantage to race to the game's greatest lead (60-42). Our team then gradually began to find spaces in offense as they worked away at the deficit. Laso's men continued to edge closer until a Llull triple at the end of the third quarter made it 60-55.

Bilbao win it
The winner would be decided in the final 10 minutes. The Whites pushed on as they tried to level the game with more Llull three-pointers (22 points) and Deck. Then, the Bilbao boys stepped on the gas and posted a swift 15-6 run with some fine play by Withey, Rousselle and Inglis (all three making double digits). Mumbrú's team held out and ultimately took the win against Madrid, who will be back at the WiZink Center on Sunday against Río Breogán.