Madrid remain unbeaten on the road in the league 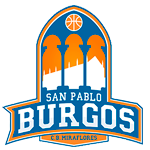 Yabusele and Poirier lead the way at Hereda San Pablo for their eleventh straight win on the road.

After winning at Hereda San Pablo Burgos, Real Madrid have now won all of their league games this season and picked up their eleventh consecutive win away from the WiZink Center. Laso's side put in a very complete performance, both in offence and defence, and were far the better side throughout the game. Poirier (12 points, 10 rebounds and 24 PIR) and Yabusele (20 points and 5 three-pointers) were outstanding in a team in which Randolph, Abalde and Hanga also put in great performances.

The status as the best visitors was put to the test in a Coliseum Burgos that returned to 100% capacity after two years. In the absence of Williams-Goss, Laso handed the baton to Juan Núñez, a first-time starter. The youth player responded with his customary flair, opening up a 0-7 lead alongside Tavares. As the minutes went by, the lead increased to +11 in the first quarter thanks to defensive solidity, dominance on the rebound and Yabusele inspired from the three-pointer line. The Frenchman scored 3 of 4 to get 11 points in 8:50 minutes of play (14-22, min.10).

Madrid domination
The visitors' feeling of superiority stemmed from their intensity at the back, forcing turnovers from a Burgos side with only Phillip posing a threat. They were also patient in attack, moving the ball around very fluidly. At all times, our team were able to find good options, both on the inside with Poirier (6 points, 7 rebounds and 15 PIR at half-time), and on the outside with two three-pointers from Llull, another from Randolph and one more from Abalde. During the second quarter they managed to keep a lead of between 8 and 12 points (30-41, min.20).

Real Madrid didn't allow the home side the chance to get into the game and ensured that the Coliseum's atmosphere remained under control. Madrid replicated the 0-7 start at the beginning of the second half, with Abalde and Deck providing the new attacking force. The three-pointers continued to flow and the defence was working flawlessly, reducing the Hereda San Pablo Burgos threat to a 20-point difference in the 25th minute at 33-53. Paco Olmos' team reacted by improving from the outside, but it wasn't enough as Laso's team remained strong, responding to each action with a trey, a dunk or a 2+1.

Solid victory and good feelings
Poirier grew and was unstoppable in the zone, almost recording a double-double, after Tavares' 3 personal fouls. Yabusele broke his three-pointer record as a madridista (5/6). The two has more than 20 PIR in the final quarter and the side managed a comfortable lead of around 16 points (52-69, min.32). Everyone contributed in an impressive Madrid display. Randolph, Abalde and Hanga also hit double figure scoring (70-85, min.40). The week came to an end with victory number 18 in the league. The next week two games at the WiZink are against ASVEL and Baxi Manresa.