Florentino Pérez: “Being part of Real Madrid is an honour and a source of pride, it's the club of the 23 European Cups"

"The transformation of the Santiago Bernabéu will be a turning point in Real Madrid's history", said the president in his opening speech at the Ordinary General Assembly 2021.

President Florentino Pérez opened the 2021 General Assembly of Delegate Members, which was attended both virtually and in person at the basketball hall at Real Madrid City. The Real Madrid president began by remembering all those who have lost loved ones as a result of COVID: "We extend our support and strength to them all, and to all those who are still fighting to beat the illness. Today, we remember those who have left us during this time. Among them are football and basketball players such as Pachín, Luis del Sol, Calpe, Pedro Casado, Antonio Gento, Justo Tejada, Antonio Gausí, Wilson Jones, Arsenio Lope and José Antonio Muñoz, as well as other great madridistas like José María Paz Casañé and Emilio Butragueño Benavente".

“We are facing a decisive moment for Real Madrid and for football at large and I undertake this new mandate with an enormous sense of responsibility, well aware of the great challenges we have before us. The pandemic has changed everything. Its consequences have been and continue to be disastrous. The unity of our members is our greatest strength, something which has allowed us to retain the institutional solidity that makes us what we are: the most loved and admired club in the world".

Sporting project
"I would like to take this opportunity to reiterate our appreciation for three figures who have been central to all these achievements and will forever be in the hearts of all madridismo. Firstly, one of this club's true legends: Zinedine Zidane. His 11 titles as Real Madrid coach, among them 3 consecutive Champions Leagues, speak for themselves. He is a loyal exponent of the values of Real Madrid and a legend of madridismo and world football".

"Sergio Ramos, our eternal captain. The best defender of all time. The man of La Décima in Lisbon. Some 22 titles in our colours, among them 4 European Cups. He will forever be one of our great figures and another example of our club's values. A legend of Real Madrid and world football".

"And Rafael Varane. He also arrived here as just a kid, and this has been his home for 10 seasons, during which time he has won 18 trophies, including 4 European Cups. He has of course left an indelible  mark on the club and won the hearts and admiration of all madridismo".

"We are taking the right steps in a rebuilding process as we look to give our squad a new boost. We have brought in one of the world's best defenders in David Alaba, who has come from Bayern Munich, a club with whom we are good friends, and where he won the lot, including 2 Champions League titles. We have also signed Eduardo Camavinga, one of world football's brightest young talents, who was being chased by some of Europe's most powerful clubs".

“It's a Real Madrid first team which is once again being led by one of the best coaches in the world, Carlo Ancelotti, the coach who brought us La Décima. His experience and his trophy haul have seen him earn the respect and admiration of the entire footballing world and he is held in special esteem by madridismo”.

Academy
“There lies the essence of our club and it is the place where the values of Real Madrid are instilled. It's the base on which we continue to build our identity and transmit those values which represent us. We have the best academy in the world".

Women's football
“Real Madrid women's team has come to the end of its first year. We feel extremely proud to be contributing to the growth of women's football around the world. In their first season, the team finished second in the League and clinched a place in Women's Champions League qualifying".

Basketball
“Finally, fans have been able to return to the WiZink Center to enjoy a team that has been delighting all madridistas with what is a historic winning cycle of 21 titles in 10 years, including 2 Euroleagues. With the last two Super Cups in a row, our team have now won 7 in the last 9 years. At the helm of this successful run is one of our own, a man who has written his name into the European basketball history books. Pablo Laso has now taken charge of more games than any other coach in Real Madrid history, and won the highest number as well: 797 games and 616 victories”.

The new Santiago Bernabéu
“Real Madrid is undertaking one of its greatest challenges. We are coming to the culmination of what seemed an impossible dream. The transformation of the Santiago Bernabéu stadium will provide the essential impetus in securing a future of growth and success. It will be a turning point in Real Madrid's history. An architectural marvel and a cutting-edge international symbol that will become one of the most attractive spaces in Madrid and all of Europe, set to play host to unforgettable experiences every day of the year".

The Foundation's work
“Today, over 65,000 people, mainly children, benefit from our 650 projects run in every corner of the globe. Since its creation, the Foundation has helped more than one-and-a-half million people, for whom our badge has represented a source of hope and joy. Now is a time for solidarity and Real Madrid will always be there alongside those who need us most”.

Super League
“The European Super League isn't just a new competition. It's far more than that. It's an attempt to change the current dynamics of football because if we fail to act, it will gradually begin to die. It is also respect for domestic competitions. Despite the numerous attempts of toxic misinformation, it was undoubtedly conceived as a project which considers national competitions with the utmost respect. Indeed, all agreements reached between the founding clubs make it very clear that the Super League would only ever run in such a way that it would be compatible with those clubs participating in their national leagues".

"Twelve of the world's biggest clubs announced the European Super League project and in order to do so, we set up a company based in Madrid. Said company seeks to fulfil the vital goals I have championed: freedom and self-management, financial fair play, good governance and transparency, solidarity, competition, respect for domestic competition and the fans and the promotion of football as the beautiful game".

"Despite attempts to enter dialogue with UEFA, making this clear in our original statement, the aggressive nature of their reaction to the mere announcement of the Super League, which we all witnessed, only confirmed the vital importance of this project and the inescapable need to regain our freedom and ability to control our own destiny. UEFA rejected any dialogue with the Super League and at the same time, presented a false story to the world. They informed fans that the founding clubs wished to abandon their national leagues”.[Asset Included(Id:1330753069601;Type:RM_Multimedia_FA)]
"The pressure and threats exerted by UEFA on every level were so extreme that they led to 9 of the 12 clubs publicly announcing their desire to step back from the Super League project, despite the binding commitments undertaken which ultimately are impossible to break. This pressure and threat had no effect on the 3 historic clubs which have 20 European Cups between them, two of which are owned 100% by their members, Real Madrid and Barcelona, and another, Juventus, which has belonged to the same family for the last 100 years".

"Perhaps we need to remind UEFA who Real Madrid is. Real Madrid is the most decorated club of all time, a club which ever since it was founded in 1902 has been involved in every necessary innovation throughout the years, and one which has stood up for footballing traditions whenever they have been under threat. It was the only club in the world to help found FIFA in 1904 alongside the federations of seven countries. In 1955, it was also the driving force behind the creation of the European Cup, alongside the L’Équipe newspaper" .

"And, even more significant, the Spanish Justice system has raised the case to the Court of Justice of the European Union in Luxemburg, who will rule in binding fashion across the European Union on UEFA's monopoly on European football, a verdict which UEFA will be forced to abide by because, despite being a private Swiss association, they operate on European Union territory".

CVC
"While the international outlook has been dominated by the European Super League, on a national level, we have the agreement proposed by the Liga de Fútbol Profesional with CVC. This is a move which lacks any financial sense for the clubs and is hugely profitable for CVC and other stakeholders".

"Frankly, I never imagined I would learn through the press that LaLiga intended to take no less than 11% of the television rights for the next 50 years from the Real Madrid members and hand them to an investment fund. Rights which, besides, do not even belong to LaLiga but are the direct property of the clubs. LaLiga is simply a marketer which must abide by very clear rules as provided for in the Royal Decree Law 5/2015".
[Asset Included(Id:1330753154038;Type:RM_Multimedia_FA)]
“Real Madrid will analyse all elements of the agreement in detail and will take the appropriate action against all parties involved, in the event we consider that it infringes on the applicable regulations, defending the club's interests before the corresponding courts. We will also act if LaLiga persists in selling the television rights for periods which exceed the criteria set out by the Spanish competition authorities".

Universal and humanitarian
"Being part of Real Madrid is a source of pride and honour. It is also an enormous responsibility. Because this is the club of the 23 European Cups, 13 in football and 10 in basketball. We have been instilled with a set of values which unite us with millions of people around the world, regardless of origin, nationality, language, religion, ideology or race. Real Madrid is universal and humanitarian".

"The members, as owners of the club, are the ones who forge the path to our destiny. And now, we are once more facing a tremendous challenge. Football is crying out for a time of renovation and profound change. And Real Madrid will be at the forefront of that change because we are bound by our history and it is what our fans demand. The present situation is not easy, not for us nor any other club in the world, but the management of recent years allows us to look to the future with hope".

"We are approaching the home stretch of a dream: the transformation of the Santiago Bernabéu. We're preparing to conquer the future once again and we're rebuilding to get back to winning ways. It's a time to rediscover that hope, move forward bravely and remain more united than ever. This is the best club in the world. With this badge and these colours, we never give up". 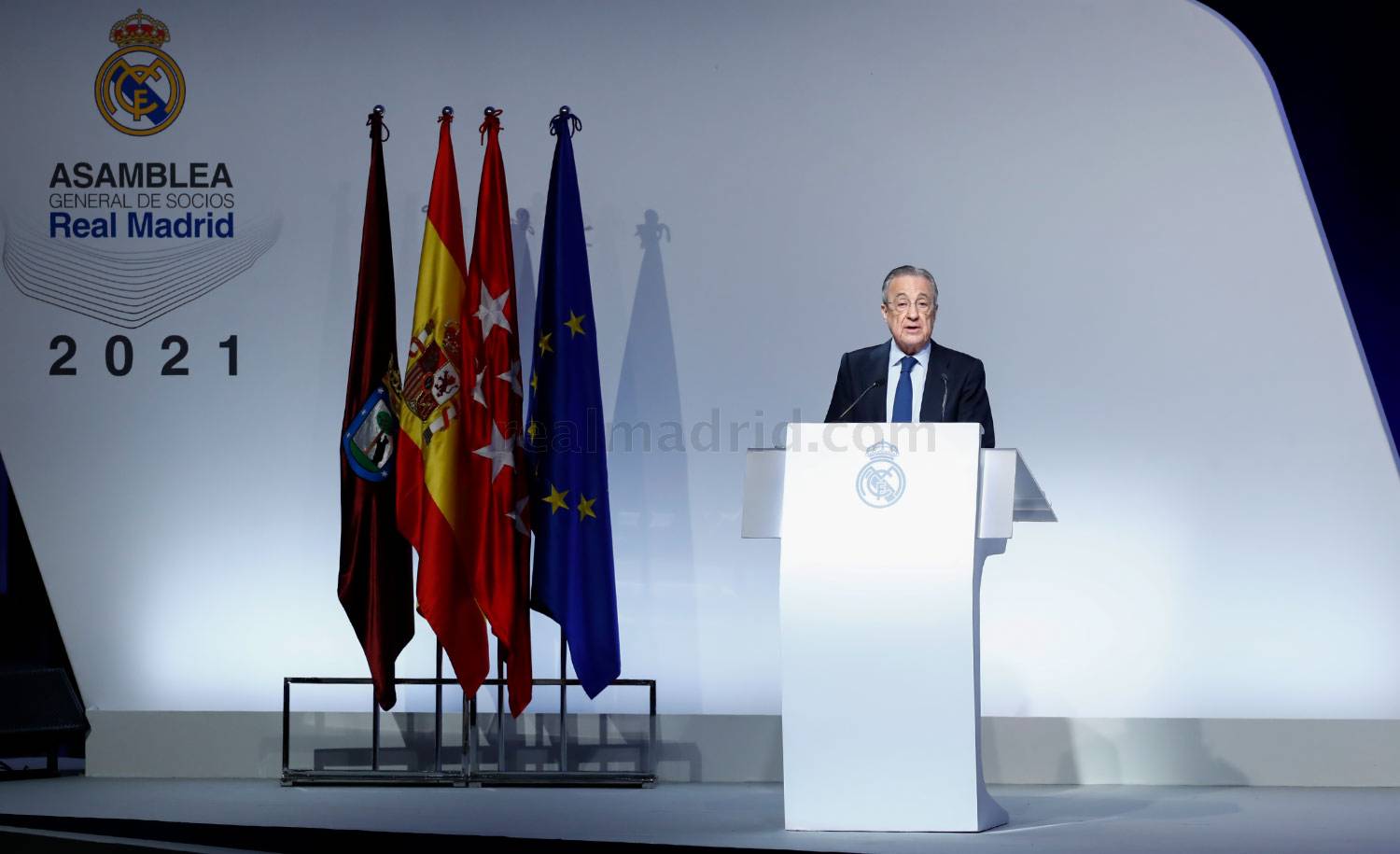 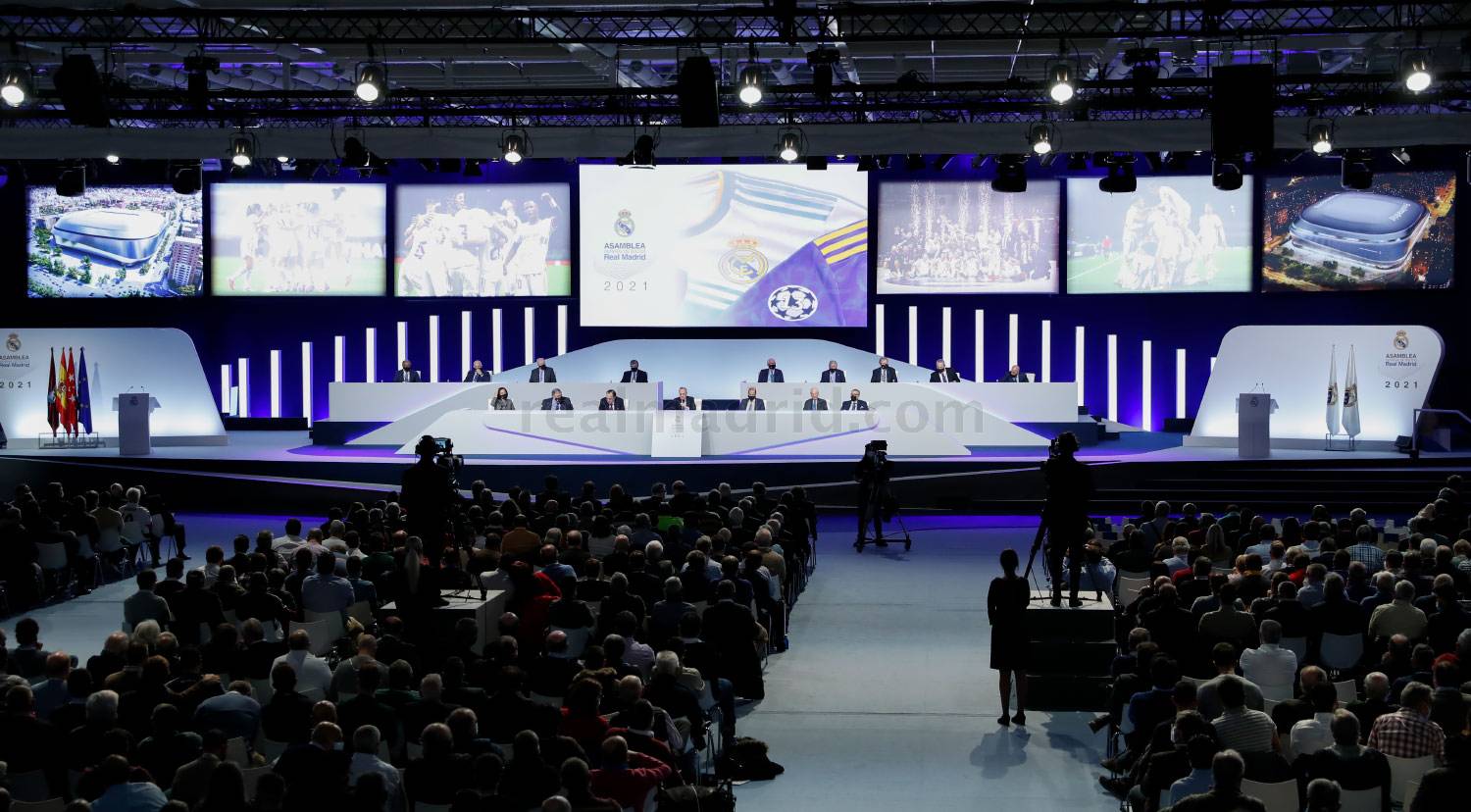 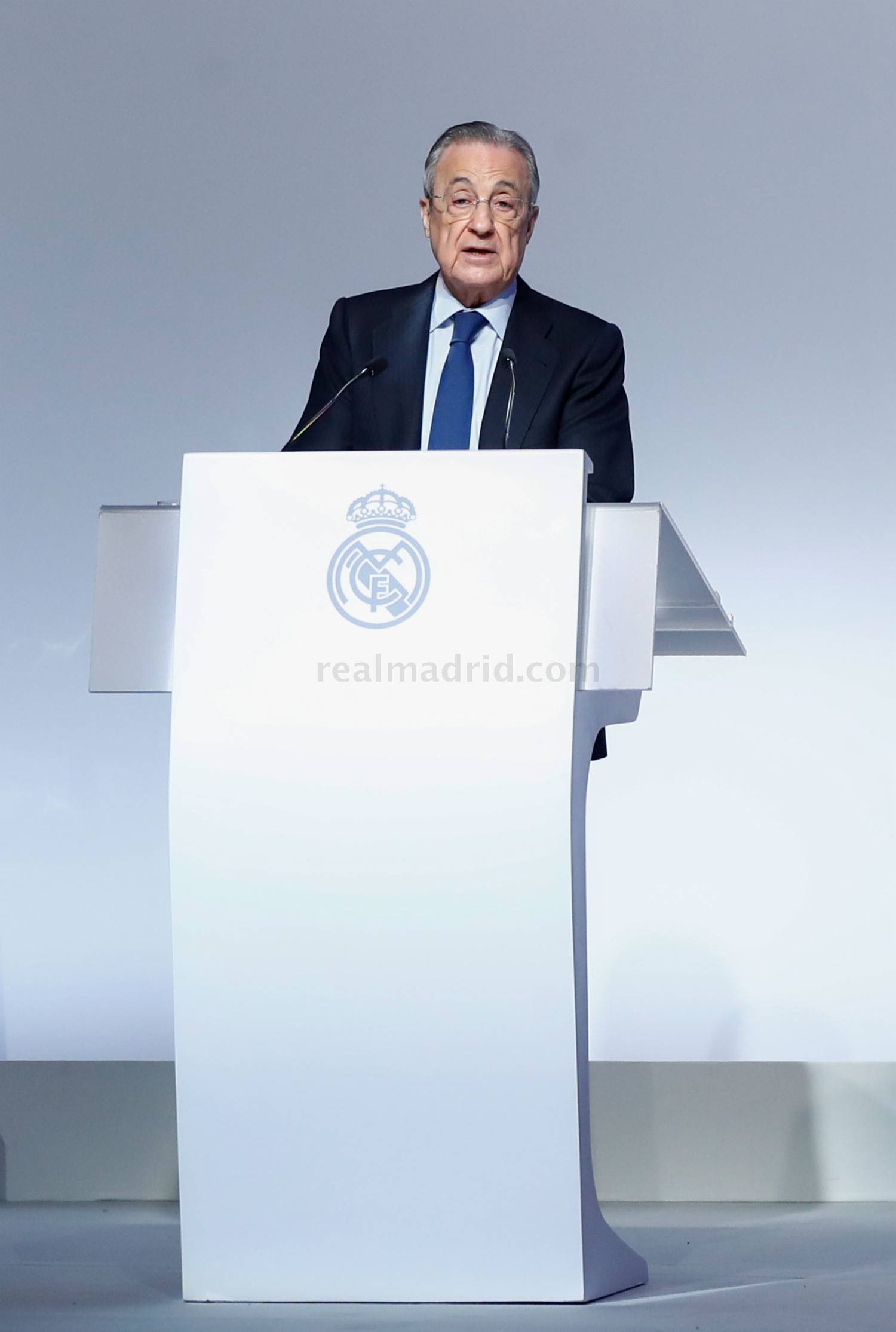 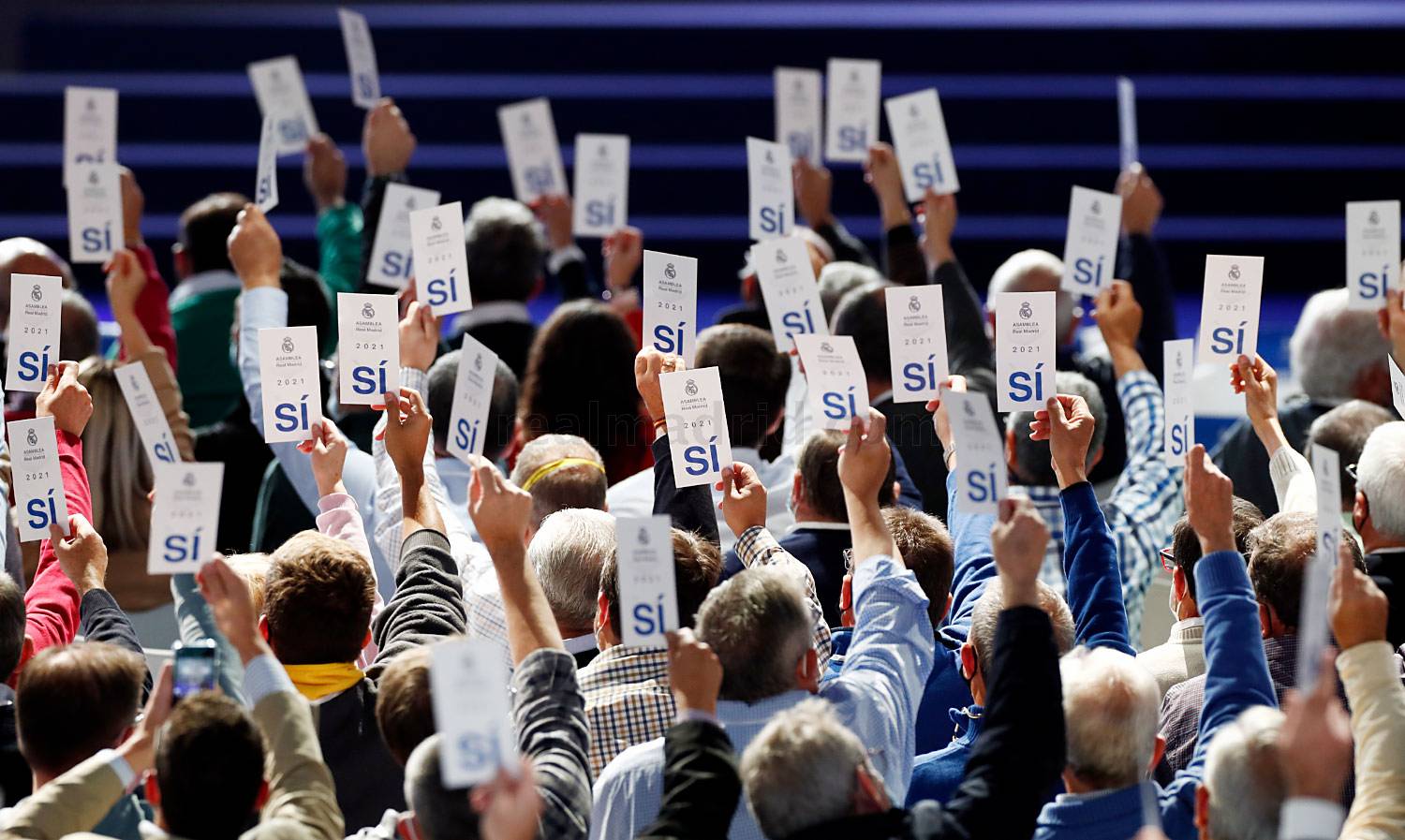 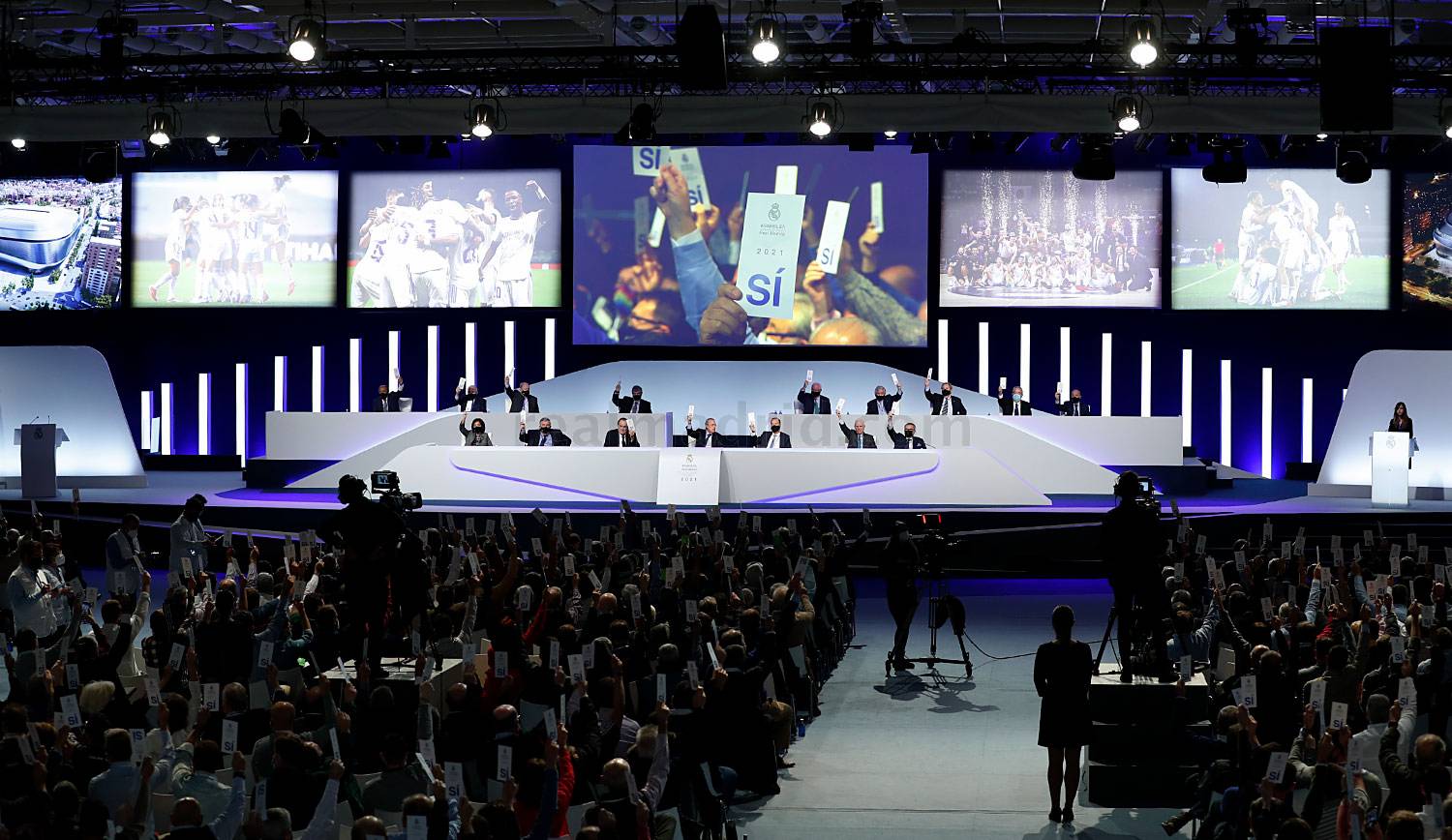 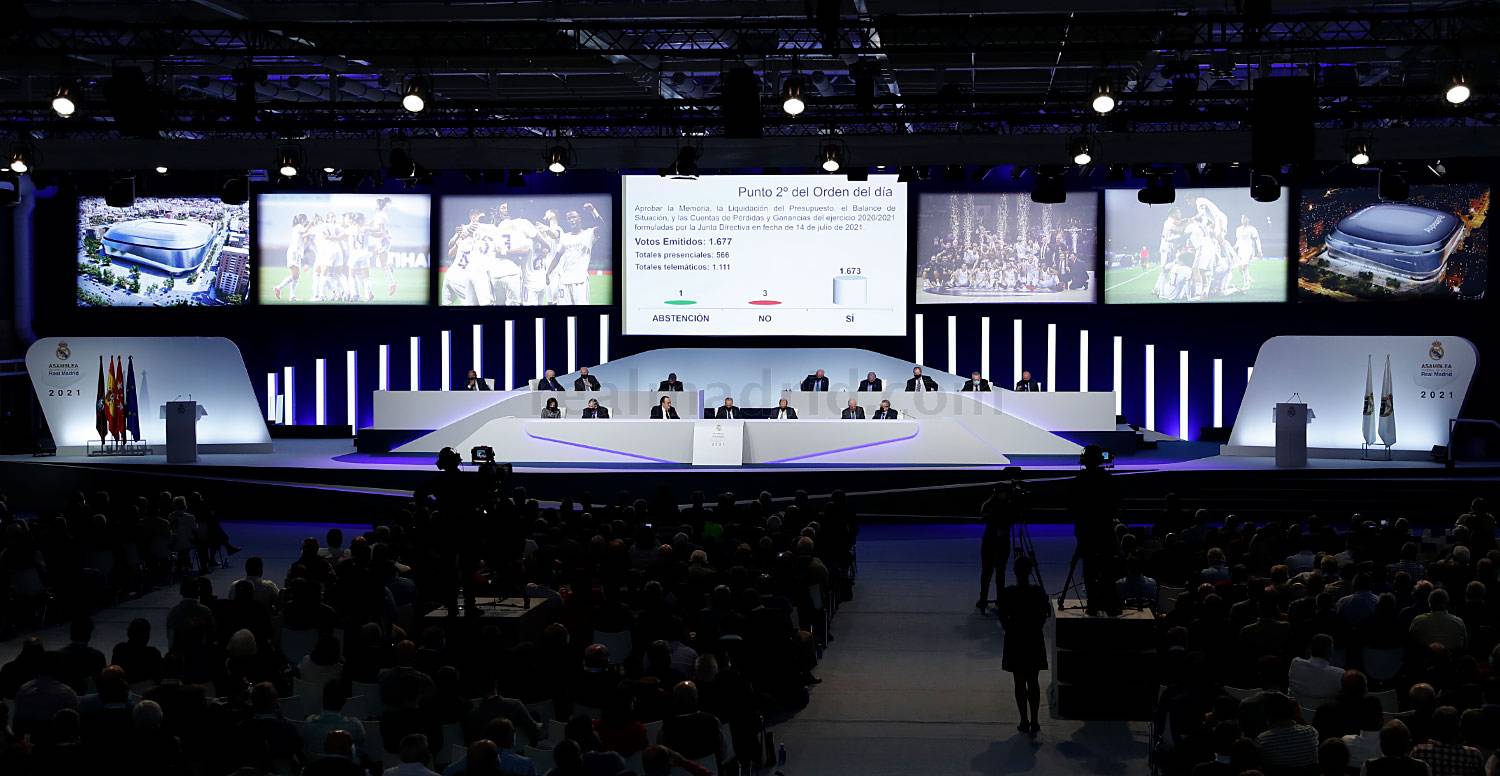 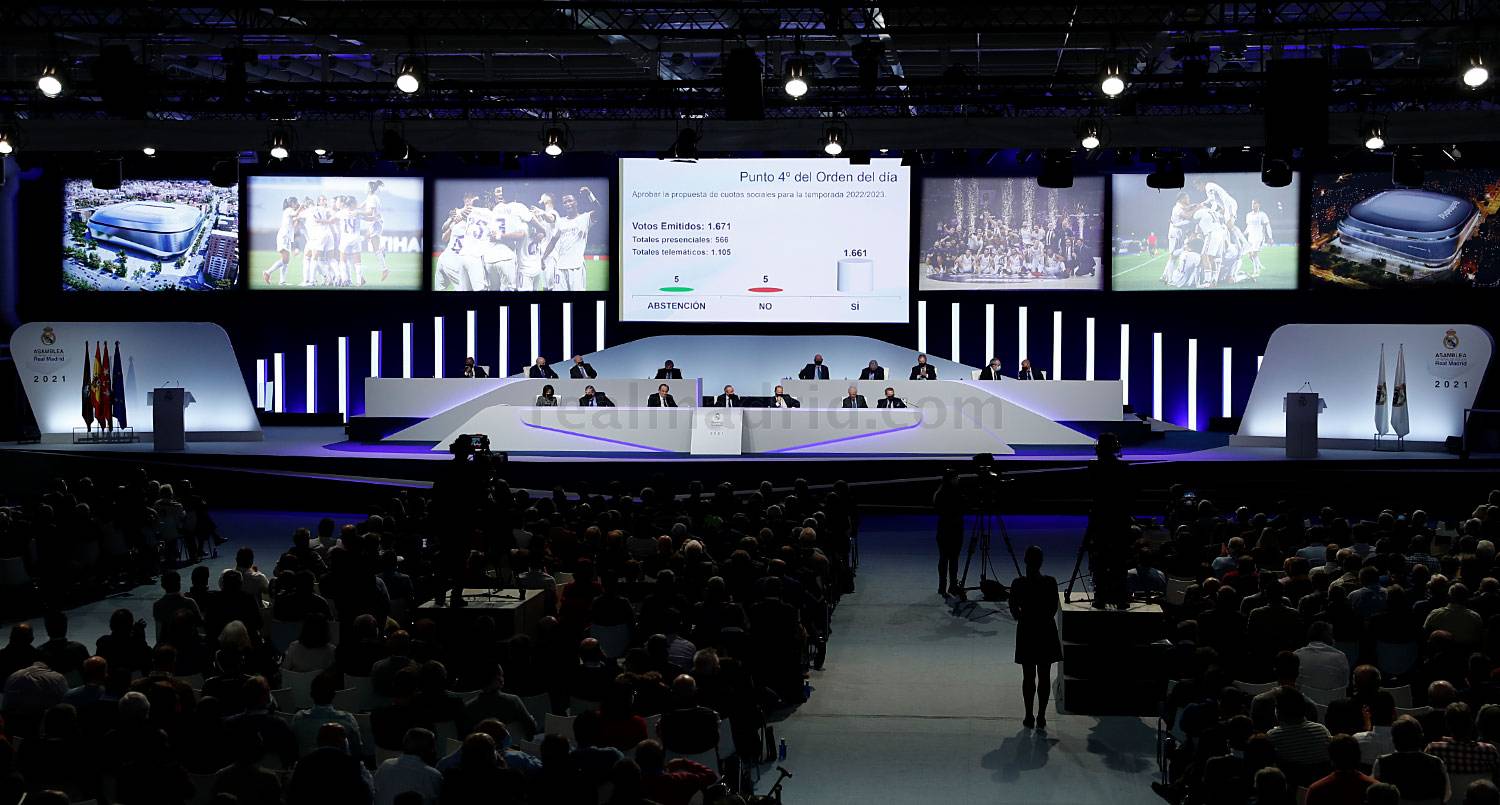 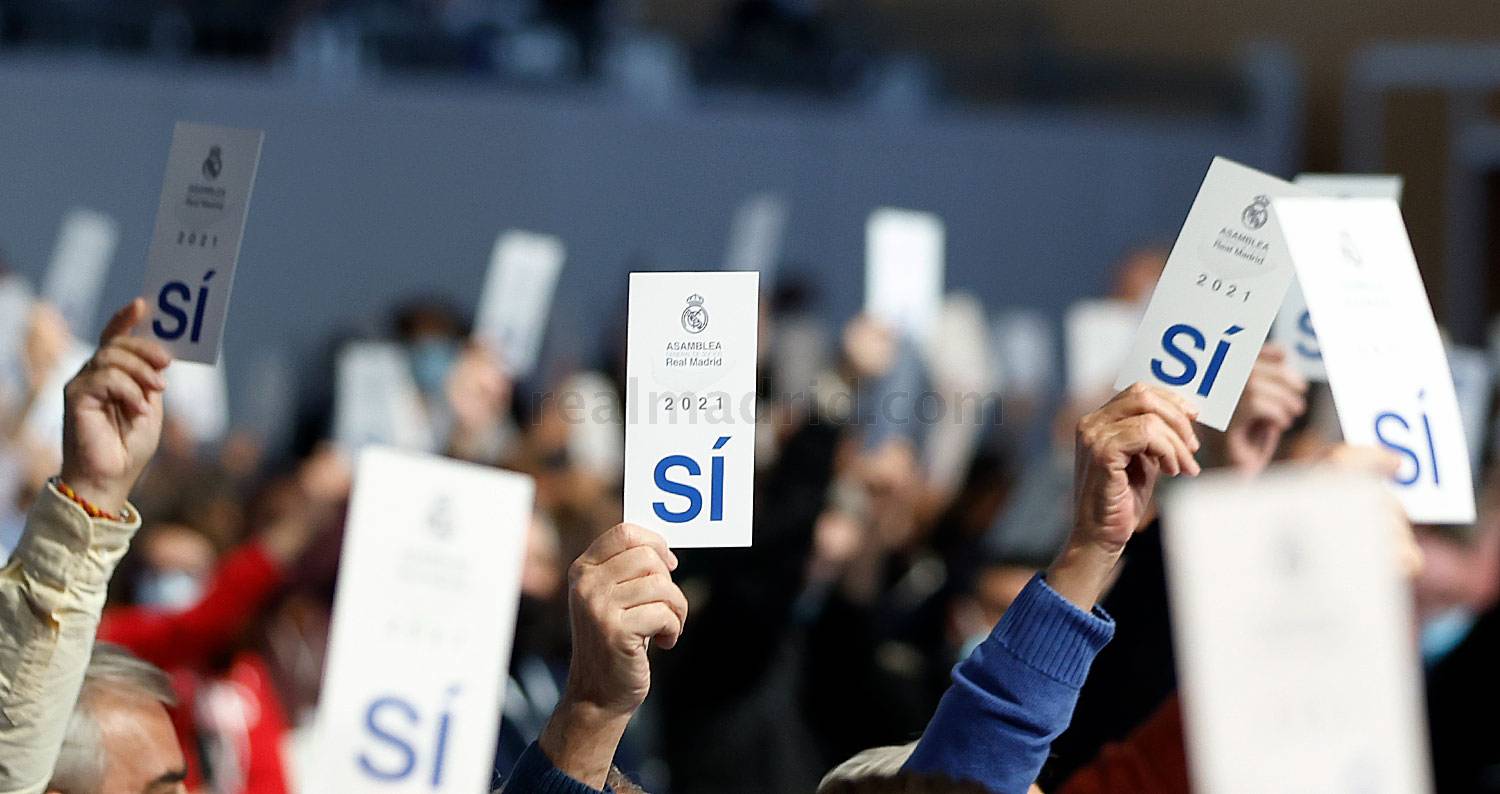