The activities are back on track after the pandemic and were officially launched with local authorities in attendance, as well as officials from the Uzbekistan Football Federation, with whom the Foundation first organised clinics in the country in 2018. The annual educational football programme with El Golazo Academy has the support of Uzmetkombinat, and a Spanish sporting director, Luis Fernández, who gave a masterclass yesterday for the local coaches and players taking part in the programme.

Arbeloa's presence
The Real Madrid ambassador greeted the authorities as well as the coaching staff and participants, and stated: "Sporting education in universal values is a very effective way to create a healthy lifestyle and habits as well as providing a solid base from which to grow as people, for this reason, we're very excited to be able to work with these organisations, which are so committed to the future of young people". El Golazo representatives expressed their pleasure at the collaboration with the Foundation, after the initial successful experience in 2018 with several clinics across the country.

The educational football programme kicks off in the city of Bekobod and will be rolled out in Tashkent in 2022. This will allow almost 300 boys and girls between 11 and 16 years old to take advantage of a programme dedicated to grassroutes football, focusing on the technical, tactical and physical aspects, using the educational values of team sport (respect, motivation, responsible self-esteem, teamwork, healthy habits, committed autonomy, equality and solidarity).

Next stage
The Real Madrid Foundation is also hoping to launch two permanent socio-sports schools in two public schools in Samarkand and Tashkent during the season which will benifit 300 children, thanks to the important support of Mohammed bin Rashid Al Maktoum Global Iniciatives and El Golazo Academy, which will be the Foundation's first permanent social sporting projects in Central Asia. 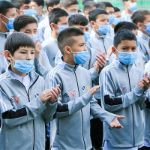