Our team are looking for the first title of the season in a repeat of the last two finals of the competition (6:30pm CEST).
Real Madrid and Barça go head-to-head at the Santiago Martín center in Tenerife this evening with the season's first title in play: the Super Cup. Our team, the tournament's most decorated (7) and winner of the last three editions, facing their nearest challenger (6). It's the third final in a row which pits the madridistas against the azulgranas.

A look at recent history shows us Real Madrid dominate the trophy haul, particularly in their head-to-heads with Barça in the title decider. They've won the last 5 finals between the two sides (Zaragoza 2012, Vitoria 2013 and 2014, Madrid 2019 and Tenerife 2020). In that time, Laso's team have only missed out on the showpiece event on three occasions, while Barcelona lifted the trophy once (Malaga 2015) and made the final once (Vitoria 2016). It's set to be the eighth Clásico Super Cup final (5-2 to the madridistas).

On the road to the final, Real Madrid saw off Lenovo Tenerife in a hard-fought affair. The hosts and semi-finalists in the league last season pushed the Whites to the limit but Laso's team saved their best for the key moments with Yabusele and Williams-Goss leading the way to victory. Barça looked convincing in their win over Valencia Basket, with Davies and Higgins the standout men for the Catalan team.

The opposition
It's the second competitive game and first Clásico of the season and there's a trophy up for grabs. With the campaign barely underway, Barça have some new faces in Tenerife in the form of Jokubaitis, Laprovittola and Hayes. The madridistas' signings (Yabusele, Williams-Goss, Heurtel and Hanga) have already produced a promising display in the semi-final and teamwork will be crucial to stopping the abundant talent available to Jasikevicius. Real Madrid will be hoping to get the season off to a flying start. 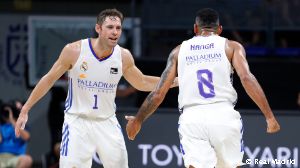