2
Real Madrid failed to pick up a first win of the season in the league opener at the Alfredo Di Stéfano. Atlético took all three points in the derby, which got off to the worst possible start for David Aznar's team when a defensive mistake just five minutes in let Deyna pounce on the ball in the box to put the rojiblancas ahead. Following the goal, Madrid upped the pressure and Esther forced the opposition goalkeeper into a fine save with a shot from the edge of the box ten minutes later.

With half-an-hour gone, the match was becoming an increasingly end-to-end affair with chances in both boxes. Nahikari tried her luck with a free-kick out wide but Lindahl stopped it without issue. Aleixandri responded before the end of the first half but a superb intervention by Ivana denied the visitors another goal.

Second strike
After the break, Atlético could have increased their lead after just two minutes, but Ivana was sublime to keep them out once again. Minutes later, Misa parried a fine cross into the box and the Whites' defence did well to deny Kgatlana a clear shot on goal. The madridista reaction came with an hour on the clock, when Esther unleashed a powerful left-footed drive in an attempt to surprise Lindahl, but it flew just over the bar. The forward was at it again two minutes later but the goalkeeper repelled her effort this time around. On 79’. Nahikari narrowly missed the target when she took a free-kick from outside the box. In the following counter, the visitors made it 2-0 when Banini finished off a swift move. The madridistas continued to look for a goal in response but the scores remained the same until the end. 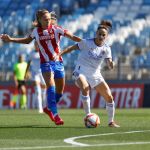