It was inaugurated in 1899 and hosted the most-attended football match in UK history (118,567).
Real Madrid will play at Ibrox Stadium for the second time in their history, some 58 years on from the first round first leg of the 1963/64 European Cup, which went the Whites' way thanks to a Puskas strike. The historic ground has been around for 122 years and has become truly iconic over that time. Indeed, it hosted the match which still boasts the highest attendance ever in the United Kingdom (118,567), the January 1939 league clash between Glasgow Rangers and Celtic.

The stadium now has a capacity of 50,987 and is home to Glasgow Rangers. It had to be rebuilt almost in its entirety following the collapse of a stand for the second time in 1971. The first collapse took place in 1902, killing 25 people and injuring 517, while the second was even more catastrophic, with 66 people being crushed to death. 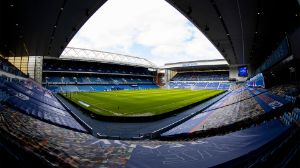