The Uruguayan midfielder has played 102 matches for Real Madrid.
Federico Valverde turns 23 today. Born on 22 July 1998 in Montevideo (Uruguay), the midfielder is about to begin his fourth season with the Real Madrid first team. Making his debut in October 2018 in the Champions League against Viktoria Plzen, the Uruguayan has made 102 appearances with the Whites. With three titles to his name already as a Real Madrid player: the Club World Cup, La Liga and the Spanish Super Cup.

Valverde joined from Peñarol in the 2016/17 season and began with Castilla. His strong performances earned him a first-team place the following season in the Primera División on loan at Deportivo de La Coruña, before returning to play for the first team. He is also a full international with Uruguay, playing for them in the last Copa América. 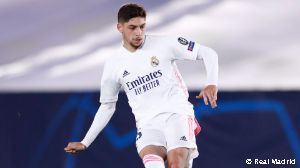