Real Madrid thrashed Barcelona in the final at the Vicente Calderón on 29 June 1974.
Real Madrid won their twelfth Spanish Cup on 29 June 1974 after a brilliant match at the Vicente Calderón against Barcelona. The Clásico was one-sided, with Santillana giving The Whites an early lead after just six minutes. In the second half, Rubiñán, Aguilar and Pirri capped off the 4-0 win and sealed the title for Madrid. Zoco, who retired at the end of the season, came onto the pitch in the last minutes to collect his last trophy as a Real Madrid player.

Luis Molowny's side had a great season with a spectacular record of 26 goals scored in 7 games. In order to reach the final, the madridistas had to get past Betis in the round of 16, Granada in the quarter-finals and UD Las Palmas in the semi-finals. 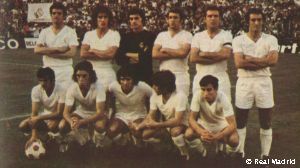