The team brings the curtain down on the season at Real Madrid City (11am CET).
Today sees Real Madrid Women close out the team's maiden season as the Whites play host to UDG Tenerife at Real Madrid City in the Primera Iberdrola (11am CET). This encounter marks the end of a campaign in which David Aznar's ladies have secured a top-three finish in the league standings and a place in next's season Women's Champions League, a competition the club will compete in for the first time in its history.

The madridistas will be looking to sign out on a high by chalking up a 12th win on home soil. As for UDG Tenerife, the islanders lie in sixth spot and have enjoyed one of their best-ever seasons, after racking up the club's highest-ever points return (57). In the reverse fixture, the Tenerife-based outfit claimed the spoils in a 2-1 win. 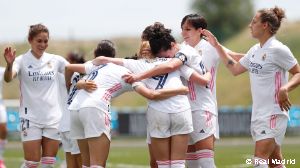