On 26 June 1977, Real Madrid defeated Barcelona in the final.
Today marks the 44th anniversary of Real Madrid's 18th Copa de España. On 26 June 1977, the Whites defeated beat Barcelona 97-71 in the final in Palma de Mallorca. Brabender was the game’s top scorer with 33 points. On the road to the final match, the madridistas finished first in the Group Stage and overcame Joventut in the semi-finals in a two-legged play-off.

Lolo Sainz's charges continued to dominate the competition and won their seventh Copa de España from the last eight seasons. It was also the team’s third trophy of the season, having previously clinched the Intercontinental Cup and the League title. 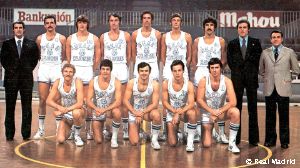