"​We’re talking about a legendary player who has captured the hearts of all those of us who love this sport“, declared president Florentino Pérez, who presented Reyes with the club's gold and diamond pin.
To mark Felipe Reyes’s decision to call time on his career, Real Madrid City played host to a tribute and farewell event held for one of the great legends of the basketball team as he brings the curtain down on an incredible career, which made him our team’s record appearance-maker (1,046 matches). The ceremony, which was attended by Florentino Pérez and several members of the club’s board; Pablo Laso; his teammates Rudy, Garuba and Alocén, as well as Sergio Rodríguez, opened with an emotionally charged video featuring the captain’s crowning moments.

The president, who presented Reyes with the club’s gold and diamond pin, sung the praises of the club legend: “You were one of my first big signings for the basketball team. You joined Real Madrid soon after turning 20 and now, after 17 seasons in which we’ve shared unique experiences together and you’ve been a role model in every game, you’ve decided to call time on a brilliant and amazing professional career”.

“Besides your achievements, trophies, feats and wins, there is something very special about your career. Because you, Felipe, have been one of the leading names in European basketball over the course of these years. It’ll be tough for everyone to get used to the fact that we’ll no longer see you on the court claiming rebounds under the basket. And, in particular, it’ll be very difficult for our fans to watch our Real Madrid without its eternal captain giving his all in the crucial minutes of games. However, your example and the values that have made you an unforgettable player will forever live on because you’re now part of our legacy”.

Captain of club’s Novena & Décima triumphs
“You’re part of one of the most amazing spells in Real Madrid’s history. Since you made your debut, on 25 September 2004, you’ve carved out a legacy for yourself that has helped to build on our club’s iconic status. You’re Real Madrid basketball team’s leading appearance-maker, with a total of 1,046 matches. You have lifted 23 trophies with this club: two EuroLeagues, one Intercontinental Cup, seven league titles, six Copas del Rey and Spanish Super Cups apiece and a ULEB Cup. You’ve achieved countless records and your statistics prove the significance of one of the greatest players in the history of our basketball team. You’re the captain who lifted the Novena and the Décima (the club’s ninth and 10th European Cup crowns)”.

“We’re talking about one of the greatest Spanish players of all time here and a legendary player who has captured the hearts of all those of us who love this sport. He’s also an exceptional human being and I hope that he’s soon able to enjoy the tribute he deserves in an arena full of our fans. Dear Felipe, today you should feel the great love from your teammates, your coaches, the club staff and everyone who’s part of the great Real Madrid family. As president, I want to thank you for your commitment, the excitement you’ve given us over all of these years and I want to make it clear that it’s been a pleasure for me to have you as a Real Madrid player. You know very well that this is and will always be your home. You’ve earned affection, admiration and respect from everyone”.

Felipe Reyes: "I’ve accomplished a life dream"
“The moment has come that no player wants to ever come round. I’ve always given 100%, I’ve given my heart and soul and everything on the court in every game. This is the end of an unforgettable chapter in my life in which I’ve been lucky enough to play for the two teams in my city: Estudiantes and Real Madrid. I’d have liked to have carried on playing for many years to come and continue to enjoy the company of my teammates and revel with our fans, who I’ve really missed in these recent months”.

Gratitude to the club
“I want to thank Real Madrid, my boyhood club that’s given me everything. I joined the club as a young lad and I’m now retiring at 41. You’ve taught me everything, I’ve improved as a player and as a person and I’ve learned values that are more important than all of these trophies. I’ve learned to never give up and fight until the end and give my all. I’ve learned that talent and quality without constant effort are no use at all. In recent years, I’ve tried to pass that legacy on to the younger players. It’s all about enjoying every moment and listening to the advice of the senior players”.

“Many thanks to our president, Florentino Pérez, for his unwavering support, for helping us and driving us on to be better and for allowing me to live out my dream of playing for Real Madrid, the greatest club in the world. I’ll never forget that. I also want to thank all of the staff and Juan Carlos Sánchez and Alberto Herreros. You’ve all played your part in the success we’ve had during these years. I also want to thank the fans. I’ll be eternally grateful to you. I’ve really missed you and I would have liked to have said goodbye and felt your affection and support. I’m sure that we’ll see each other again. I also want to thank all of my teammates. I’ll take you with me in my heart and I’ll miss every day spent with you in the locker room. You’re the best. You’ve allowed me to experience some unforgettable times. We’ve laughed together and enjoyed some good times and have endured some bad ones. Hala Madrid!". 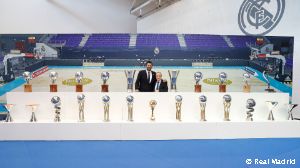 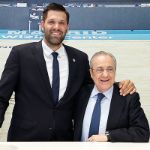