The madridistas lost to Deportivo by a single goal despite having chances to win the game.
Marbella Fútbol Center

1
The Under-19s will not be present in the Champions Cup final after they came up short in the semi-final against Deportivo (0-1). The madridista academy side were unable to convert their glut of chances, and Fito's goal on the stroke of half-time was enough to see the Galician side take the win. Jorge Romero's boys began the game in dominant fashion, pushing forward well in attack. Before the first ten minutes were up, they'd already forced Brais into two fine stops. Peter was the first to try his luck on 6’, with a powerful long-range effort, before Salazar's strike was then kept out by the opposition goalkeeper just a minute later.

The Whites continued to press forward and with 24 minutes gone, David wanted a penalty when he fell in the box under challenge from Mella. Ten minutes on, Salazar was inches from meeting a superb Peter cross but the Deportivo got just enough on it. Despite the madridistas' superiority, Fito netted a header to put his team up on 44’.

Chances
The goal didn't knock the Under-19s off their stride and they came out after the break looking for the leveller. On 50 minutes, Bruno nearly found it when David played him through but Brais stopped his shot. The goalkeeper saved his side again on 57’, repelling a David free-kick. In time added-on, Gudjohnsen had a good chance to tie the game but his decent header was kept out yet again by the goalkeeper. 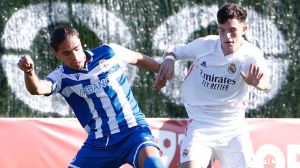