The team needs to win at the Palau to level the league final series (10pm CET).
Real Madrid tonight faces the second match-up of the league final against Barça at the Palau Blaugrana. With the Whites trailing 1-0 in this best-of-three series, only a Madrid win will force a third and decisive match, which would be played on Thursday at the WiZink Center. This is yet another challenge for this team, which always thrives in adversity and will have to prove exactly why it boasts the division's best record in road trips. The guests have already won this season on Barça's floor and will be going all out here, as Tavares confirmed in the build-up: "We'll fight until the end. We've already won once there this season and so are capable of doing it again”.

This is the attitude that Real Madrid takes into tonight's game in the Catalan capital. The Azulgranas took the lead in the series on Sunday and there's now no margin for error, but the madridistas have found themselves in a similar situation this season against Anadolu Efes. The Whites claimed victory in two win-at-all-costs games and that's sure to boost the players ahead of tonight's match-up, although the hosts have everything in their favour and has a chance to secure the league crown on its own court.

Jasikevicius is well aware that Real Madrid is the only team capable of turning any situation around, regardless of how tough it is and is wary of being over-confident: "We know that we're up against a winning team that has fought many of these battles with the same coach and players". The key will once again for Pablo Laso's charges to match the Azulgranas' physical toughness and attack in greater numbers to overcome the hosts' defense.

Out to confirm status as best road team
Madrid has enjoyed a record-breaking season on the road. It won all 18 games away from the WiZink Center in the Regular Season and was only downed against Valencia Basket in the semi-finals. The Whites saw off Barça at the Palau Blaugrana a little over two months ago in a 85-87 success on a day when five players posted double digits in the scoring stakes. Tonight sees the team that never gives in face yet another challenge (10pm CET). 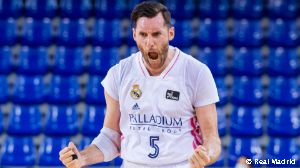