Real Madrid won the title on 14 June 1987 with a 1-3 victory against Zaragoza.
Real Madrid won their twenty-second league title 34 years ago. After beating Zaragoza at La Romareda (1-3) on the penultimate matchday of the season, the team mathematically sealed the title on 14 June 1987. Butragueño's brace and a goal from Solana were enough for the Madridistas to win the league.

That 1986/87 campaign had a different format, as it was carried out with a final playoff system following being ranked as the best team in the first 34 rounds, Real Madrid led the top six teams, facing each other again to decide the champion. At the end of the 44 match league campaign, Real Madrid were the team with the most points (66) ahead of Barcelona (63).

Hugo Sánchez top scorer
Real Madrid were the top scorers in the championship with 84 goals and Hugo Sánchez won the top scorer award with 34 goals. Leo Beenhakker's sqaud won the first of his three league titles on his first season at the helm of the Whites. 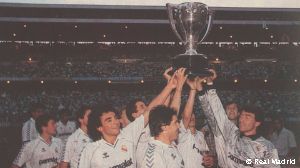