Real Madrid clinched the 1996/97 league championship with a 3-1 win over Atlético on the penultimate matchday.
Today is the 24th anniversary since Real Madrid won their 27th league title. The Whites mathematically clinched the title on 14 June 1997 after beating Atlético de Madrid (3-1) at the Santiago Bernabéu on the penultimate matchday.  Raúl and Hierro scored before half-time to give our team the lead befire Mijatovic scored the third goal after the break.

Real Madrid ended LaLiga with a two-point advantage over Barcelona and a 15-point lead over Deportivo de La Coruña and Betis. Suker was the team's top scorer that season, with 24 goals, followed by Raúl (21). That team was coached by Fabio Capello and did not lose a game until matchday 25. 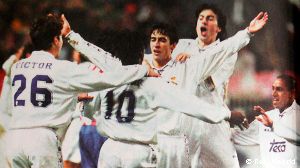