Laso's men open the best-of-three playoff final series at the WiZink Center (6:30pm CET).
The big final showdown provides us with an ​El Clásico encounter. Real Madrid goes in search of its 36th league title to further add to the club's amazing trophy haul in the competition. The Whites face Barça, who lie directly behind Madrid in the silverware stakes (18) in what will be the 27th final between the two teams. Tonight marks the first match-up at the WiZink Center, where Laso's troops are unbeaten in the playoffs and will be looking to make it 1-0.

The two powerhouses go head-to-head in a final between teams with 53 titles between them as first face second from the Regular Season. Real Madrid has contested 46 league finals and prevailed in 35 of them, whilst this will be Barça's 38th final and they have claimed victrory 18 times. The madridistas required one game less to reach the showpiece after downing Herbalife Gran Canaria (2-0) in the quarter-final and overcoming Valencia Basket in the semis (2-1). Meanwhile, the Azulgranas beat Joventu 2-1 and overcame Lenovo Tenerife. The teams' meetings in the Regular Season yielded a draw and a win, both of which came on the road.

Madrid welcomes back Llull, who was on excellent form on Thursday night (13 points) and Abalde to face a full-strength Barça side. Elements like the defense, rebounds, where our team has been dominant during the league and the playoffs, and accuracy will determine the outcome. However, above all, there's one thing that's non-negotiable when you face opponents of this standing: intensity and focus throughout the 40 minutes.

Jasikevicius's troops have recorded a high percentage on triples and in the paint, which will serve up a battle between several of Europe's best centers in the shape of Tavares, Poirier, who will get his first taste of El Clásico action, Gasol and Davies, whilst not forgetting Garuba. The youth graduate is capable of being the difference-maker, as we saw in the third game of the semi-finals, where he smashed several records.

Most recent head-to-heads
Madrid and Barça have dominated the final line-ups in the past decade. Under Laso's tutelage, our team has made every final in which the playoff format has been in place since he took up the reins in the 2011/12 season. Since then, the Whites have met the Azulgranas in six finals and come out on top four times, the last three of which were in successive years (2014-15, 2015-16 and 2018-19). Llull could be set to make his 500th ACB appearance for Real Madrid tonight. 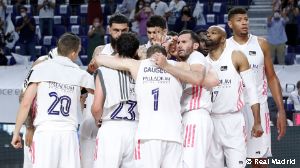