After losing the first game of the final against Barça at the WiZink Center, the Whites must now win the next two games in order to become champions.
WiZink Center

89
Real Madrid come up against yet another challenge this season, having lost the first match of the final against Barça at the WiZink Center. The Whites will now travel to the Palau Blaugrana looking to a winin order to take the tie to a third and definitive game on their home court. Laso's side began well but their lack of success in the third quarter cost them and saw them fall behind in the final stretch, despite looking to mount a comeback right until the end. Tavares led the team with 16 points, 11 rebounds and 26 PIR, while Llull celebrated his 500th league game for the Whites.

Real Madrid started the final well, full of confidence and dominating the offensive rebound with great defence, with  9-0 run in the first four minutes. Tavares was led the way with 4 points and 6 rebounds, while Abalde was back in the starting line-up after overcoming COVID-19 and Jasikevicius was back on the bench. Kuric and Gasol gave Barcelona an advantage, but Real Madrid were very solid, especially with the Cape Verdean pivot dominating possession in the zone and Llull showing signs of improvement. Five consecutive points from the Menorcan in his 500th ACB game for Real Madrid saw a +5 gap in the first quarter (20-15).

Real Madrid's initiative
They continued with their intensity at the back, dominating a Barça team that struggled to score. Their superiority in offensive rebounding, thanks to the great work from Poirier and the contribution of Causeur (5 points), enabled them to take an advantage of up to 8 points for a large part of the second quarter (32-24, min. 17). But Barça's pressure all over the court paid off. In the next two minutes they tied the game at 32, led by Higgins. Real Madrid managed to go into the break with the lead at 36-33.

Real Madrid looked to get off to another good start in the third quarter (44-37, min.24). However, the visitors' fight back came along with Alocén's fourth foul. The inspired Higgins opened up a lead that grew as the third period wore on opening up a 10 point lead at 44-54 in the 28th minute. The Whites failed to score. Carroll and Rudy stepped up and helped the team in attack but Barça responded with a counter-attack through Mirotic to hold on to the lead (52-62, min.30).

Barça were in control of the game and it looked as if they had the upper hand in the third quarter. Real Madrid tried to go against the clock, but the opposition kept hod on to a comfortable lead (56-73, min. 24). Alocén's return boosted the side, who reduced the deficit to 13 points. But it wasn't enough and the 20 offensive rebounds didn't stop Barça from winning the first match in the final. The second game will be played at the Palau Blaugrana in 48 hours' time. 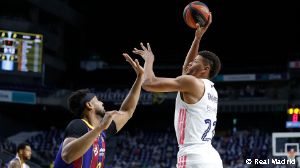 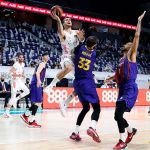