The French defender joined Real Madrid in 2019 and has already won one LaLiga title and one Spanish Super Cup.
Ferland Mendy will be celebrating his second birthday as a Real Madrid player. The French full-back, born on 8 June 1995 in Meulan-en-Yvelines, has made 70 appearances for the Whites so far and has won two titles with the club: a LaLiga title and a Spanish Super Cup.

On 19 June, he was unveiled as a Real Madrid player, joining from Olympique Lyon. He made his official debut for the team on 1 September against Villarreal in LaLiga. Mendy is also a full international with the French national team. 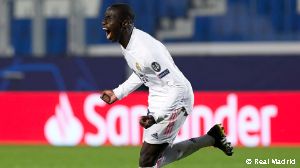