Real Madrid failed to down Valencia Bakset at La Fonteta and the semi-final series now returns to Madrid for the third and final game.

67
The playoff semi-final will ultimately come down to a third and final game. Real Madrid lost in the second game against Valencia Basket at La Fonteta and will now play for a place in the league final on Thursday at the WiZink Center (10pm CET). Our team kept going until the end but lacked accuracy and freshness against opposition who proved to be solid. Carroll's 13-point haul made him the leading scorer for Laso's men, who have set a club record for the most matches in a single season (84), whilst Taylor made his 400th appearance for the Whites.

Valencia Basket's strong start in defense handed the hosts the initiative in the opening stages of this second semi-final match-up. Madrid slowly began to find its feet in offense and was playing under the basket with Carroll involved in everything. The guard posted seven points and dominated in the scoring stakes to keep Madrid on the Taronja's tails in a first stanza that ended 24-18.

As the minutes ticked by, the intensity levels increased but there was a chaotic element to the game, which favoured the hosts. During this period, Tobey posted five points in a row as Valencia Basket established an 11-point lead  (29-18, min. 14). Real Madrid went in search of triples and sought to dominate on offensive rebounds to reduce the arrears but was lacking consistency in its play. With the Hermannsson-Prepelic-Labeyrie trident starring, the hosts managed to retain a lead of over 10 points up until the break (44-29).

The hosts had the upper hand in terms of intensity and that was reflected on the scoreboard as Valencia led by as much as 19 points following the restart. Laso's men were lacking tempo, which is understandable given that the team has played no fewer than 84 games this season, the numerous absentees and a host of other issues. However, the Whites didn't give in and showed plenty of pride. The guests improved in defense and produced better consistency in offense through Carroll, Taylor and Garuba to twice move back within 11 points, with the second instance coming on 29' with the scores at 59-48. However, several rushed plays that Labeyrie capitalised on saw the Valencians regain a comfortable lead by the end of the third quarter (65-48).

Even series
Madrid didn't manage to claw its way back into contention for victory. Valencia showed all of the energy that Madrid lacked today as the hosts displayed great solidity with the scoreboard in its favour. Alocén, Poirier and the academy graduates Juan Núñez and Tristan were heavily involved in the dying stages, but the Taronjas managed their lead well (85-67, min. 40). The score lies at 1-1 in the series and it's now time to rest up ahead of the decisive game in 48 hours' time, when the fans will take their places inside the WiZink Center (10pm CET). 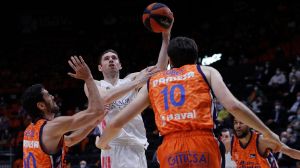