Laso's men will be looking to take the first point in front of the home fans in the best-of-three knock-out tie (6:30pm CEST).
The start of the league semi-finals brings with is some huge news for madridismo: the WiZink Center will host fans again tonight as the team head into their first clash with Valencia Basket. It's the first time the home team will benefit from their loyal support since 8 March 2020 against Casademont Zaragoza. Today, almost fifteen months on, Real Madrid will be playing for their fans once more and it's sure to be a significant factor as they look to open the best-of-three series with a win.

A fascinating semi-final awaits. The Regular Season leaders, with a win record to their name and unbeaten on the road, take on fourth place and one of the competition's biggest clubs. Madrid come into the game following a convincing 2-0 win over Herbalife Gran Canaria in the quarters, while Valencia Basket saw off Baskonia in the third game of their last-eight tie. So far this term, the head-to-head reads one apiece in the league. The madridistas came out on top at La Fonteta, 78-86 while their challengers won at the WiZink Center, 69-79. Aside from these encounters, are the two Euroleague meetings and a Copa del Rey quarter-final.

This one is sure to be decided by the finer details. Central to that, is the rebound. Laso's boys were already the competition leaders in this regard at an average of 35, before they shot up to 48 in the quarters. The Tavares-Tyus-Poirier trio was crucial to beating Herbalife and it'll be more of the same today up against opposition whose strength lies in the paint with Dubljevic, Williams, Tobey and Labeyrie. Both sides also excel from the three-point line - eleven on average for our team to 10 for the opposition. Ponsarnau has assembled a very complete unit, full of quality and points in the form of players like Van Rossom, San Emeterio, Prepelic and Kalinic.

Strength in numbers
Despite injuries, Real Madrid's standout ability is their strength as a group. They showed it once more against Gran Canaria, with a sublime team performance and points spread well around. Eight of the 12 players who took part in the quarter-finals posted 10 or more in a game, with Rudy (14) and Carroll (12.5) the go-to men in offense. This is set to be the fourth time the two teams meet in a league semi-final. In the three to date, Real Madrid have booked their place in the final (1997-98, 2015-16 and 2017-18). 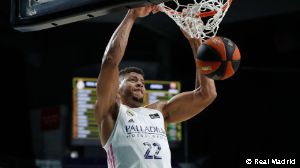