The 17-year-old played in the first league semi-final game against Valencia Basket.
At 17 years and 2 days old, Juan Núñez made his Real Madrid first-team debut in an official game, becoming the sixteenth youth player to do so under Pablo Laso. The point guard from Madrid, part of the youth team that has just won the Euroleague in his age group in Valencia, was on the court for 7:25 minutes and contributed 2 points, 2 rebounds, 1 assist and 5 PIR in the win against Valencia Basket in the first game of the league semifinals. 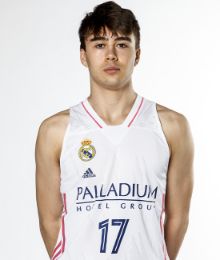