The leader of the Regular Season look to move ahead in the play-offs at the WiZink Center (10pm CEST).
Real Madrid begin the quest for the Endesa League title tonight at the WiZink Center with the first game of the quarter-finals against Herbalife Gran Canaria. After a historic regular season, Laso's side will look to get started on thr irght foot in a best-of-three play off. This will be the third time the two team shhave met in this opening round of the playoffs, with the madridistas qualifying in the previous two.

The playoffs return after their absence last season due to the pandemic. Real Madrid come in to the game off the back of their spectacular run in the Regular League, where they set a record number of wins (34) and were the first team to finish unbeaten away from home in this stage of the competition under the current format. They now face a more demanding playoff campaign than usual because all the play-offs are shortened and the margin for error is slim. The opponents are one of the regulars in this stage in the last decade and are on good form, having won 5 of the last 6 games to get into the top eight.

The madridistas will need to capitalise on their attacking flair against a Herbalife Gran Canaria side that averages 83.4 points against per game. Tavares, selected in the best five of the league, could be back after missing the last few games. Porfirio Fisac's side are one of the most threatening teams in the competition, making it a battle of height and physical strength. Another important player to watch will be Poirier. The French centre averaged 10.7 points and 8 rebounds in his six games. The islanders have two scoring point guards in Albicy and A.J. Slaughter, with the three position very well covered with Okoye and Beirán and a versatile inside game led by Costello and Shurna.

Two wins this season
Real Madrid have a 2-0 win record this season, coming out on top in both games in the Regular League. On matchday 4, by 65-90 in Las Palmas de Gran Canaria and on matchday 22 by 81-80 at the WiZink Center. This will be the third time the sides have met in a quarter-final. In the previous two, Real Madrid went through by a two wins to nil in 2014-15 and three wins to nil in 1999-2000. The last time they met in a playoff was in the semi-finals three seasons ago, ending in a Whites' win. 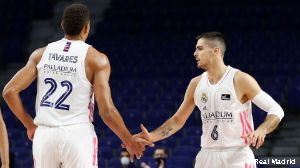