The leaders are just one win away from securing home-court advantage in the playoffs and breaking their record number of victories in this phase (9:15pm CEST).
In the next four days, Real Madrid faces its two final match-ups of the Regular League season and the Whites will be vying to record at least one victory in order to finish first in the standings and gain home-court advantage for the playoffs. This evening, the league leaders will host Bilbao Basket, who is in the midst of a relegation fight. A win for Pablo Laso’s side, which has picked up 32 wins from a possible 34, would also see the team set a new all-time record of league victories in this phase of the competition – the Whites are currently sitting level on the same number of wins they recorded eight seasons ago.

The last home match at the WiZink Center of the regular season, may well prove to be a challenging one for the madridistas, who face a team who will be giving it everything to beat the drop. The Basques go into the clash on the back of two wins (Urbas Fuenlabrada and Hereda San Pablo Burgos) and need to win at least one of their remaining fixtures and hope that Movistar Estudiantes loses its match. For the first time this season, Laso’s charges have had over a week to prepare for a game.

Madrid clinched a very hard fought victory (83-85) at Miribilla in the reverse fixture, which saw Thompkins as the stand-out player – the power forward is injured for the return game. For this evening’s match-up, the league leaders will take on a very much depleted Bilbao Basket, due to several injuries in its squad. Rouselle and Rigo are injured, but the arrival of shooting guard Jenkins (who has averaged 17 points from two matches) has boasted the side’s offence. The squad’s other new addition of the center Tote, will bolster the team’s inside game.

Rotations
Given the upcoming playoffs and with such a demanding fixture calendar, the rotations will not cease at Real Madrid, who will play its 79th game this season (four away from equalling the season with the highest number of games, 83). Consequently, faced with an opponent that is known for its power in the paint, Poirier will have a big role to play. In his first month at the club, the Frenchman averaged 10.8 points, 6.5 rebounds and 13 in PIR. Alongside him, Tavares, Carroll and Causeur are in double figures in an offence that is averaging more than 87 points. The leaders are 40 minutes away from topping the Regular League for the seventh time in the last nine years. 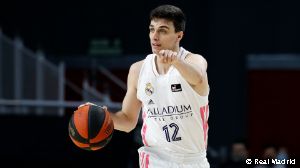