Real Madrid secured the 1979/80 league title after claiming a 3-1 win over Athletic on the final day.
Today marks the 41st anniversary of Real Madrid's 20th LaLiga title success. On 18 May 1980, our team tasted glory after securing a 3-1 win over Athletic in the last game of the season. The madridistas headed in 1-0 up at the break thanks to an Ángel strike. After the interval, Juanito added to the hosts' lead, before Dani clawed the visitors back into the game. However, Pirri converted from the spot to seal the win and the title.

Real Madrid ended the league campaign a point above Real Sociedad and with a 14-point buffer on third-placed Sporting. The madridistas were the division's leading scorers with 70 goals. Santillana (23 strikes) topped the scoring charts for Boskov's men, who guided the team to league and Copa del Rey glory in his first season at the helm. 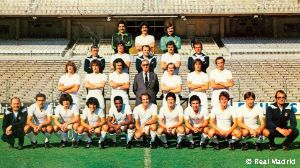