Goals from Marta Cardona and Lorena moved the team into second place in the Primera Iberdrola.
Ciudad Real Madrid

0
Real Madrid clinched their twentieth win in the Primera Iberdrola, their tenth at Real Madrid City, to move into second place in the competition, after goals from Marta Cardona and Lorena handed the team victory against Éibar. The opening stages were closely fought as neither side created clear-cut chances. The deadlock was broken in the 21st minute when Cardona picked up the ball and found space inside the area to make it 1-0. David Aznar’s side then controlled possession and went into the break a goal to the good.

After the restart, the game continued with the hosts in control of the ball, with both defences standing firm to prevent any shots on goal. The madridistas almost doubled their lead on 68’ when Asllani swang in a set-piece for Jessica Martínez whose header went into the side netting. Seven minutes later, Éibar responded with a long-range strike from Aida which was comfortably saved by Misa. The visitors pushed forward for an equaliser, but Lorena sealed the three points on 84’, after being brought on just two minutes before. She headed in the rebound after the Cardona’s fine effort had come back off the crossbar. The Whites held on the clinch a crucial win to move above Levante in the table and cement their position in the Champions League places. 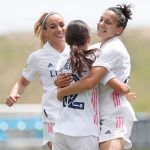