Zidane's iconic volley decided the final against Bayer Leverkusen.
Glasgow's Hampden Park hosted the Champions League final between Real Madrid and Bayer Leverkusen on the 15th of May 2002, as our team added to their legendary status in the European Cup in the club's Centenary year.

Zidane was one of the key men in the final thanks to his iconic volley which made it 2-1. On the stroke of half-time, Roberto Carlos sent in a looping cross from the left-hand side to the edge of the box, where Zidane was waiting to smash a wonderful strike past the helpless German goalkeeper. In 2020, France Football magazine named the goal the most beautiful in Champions League history.
The game had kicked off at a break-neck pace, with two quick-fire goals inside the opening quarter-of-an-hour. Raúl put the madridistas ahead when he latched on to a Roberto Carlos throw-in to beat Butt, before Lucio quickly levelled for Bayer when he headed home a corner.

Casillas makes the difference
In the second half, César was forced to come off injured. Casillas stepped in to take his place and went on to play a vital role in clinching the title. In the closing stages, the German side enjoyed several good chances to level the game but the young goalkeeper repelled them all to make sure Real Madrid would get their hands on a ninth European Cup. 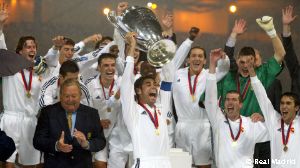