Real Madrid got the better of Arenas in the final's deciding game (2-1).
On the 15th of May 1917, Real Madrid got their hands on their fifth Copa de España. Arenas were our team's final opposition, and a replay was needed to crown a champion on this occasion. The first game took place on the 13th of May in Barcelona but neither team managed to break the deadlock following the 90 minutes, plus extra-time lasting two 10-minute halves. The 0-0 meant there would be a decider, which took place at the same venue two days later.

The showpiece was another evenly matched affair and turned into a real epic. The Basque side went ahead in the first half but the Whites drew level thanks to a René Petit strike. The full-time whistle sounded with the scores at 1-1, meaning another 20 minutes of extra time was needed, but a victor could still not be chosen. Álvarez did eventually get the winning goal for the madridistas, who then held on until the 130th minute. The epic victory saw our team lift the Copa once again, for the first time since 1908. 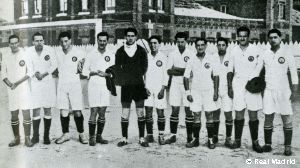