Real Madrid clinched the title on the final day.
Today marks 49 years since Real Madrid lifted their 15th LaLiga trophy. On the 14th of May 1972, the team clinched the title after beating Sevilla at the Santiago Bernabéu (4-1) on the final day. The madridistas thrashed the Andalusian side thanks to goals from Amancio and Santillana in the first half, followed by a Pirri brace in the second.

That campaign saw 18 teams compete, with Real Madrid finishing top of the pile on 47 points. They ended up ahead of Valencia (45) and Barcelona (43). Pirri, with 11 goals, and Santillana, on 10, were the team's leading scorers. The madridista squad was coached by Miguel Muñoz, who got his hands on his ninth and final League title with the team. 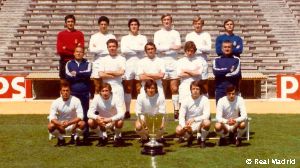