The Uruguayan made his 100th appearance for Real Madrid in Granada.
Against Granada, Fede Valverde played his 100th game for Real Madrid. The central midfielder played from the start at the Nuevo Los Cármenes to reach the milestone in his third season at the club, during which time he’s managed 62 wins and five goals. Valverde’s debut came in the win over Viktoria Plzen at the Santiago Bernabéu on the 23rd of October 2018 (2-1).

The midfielder posed in a commemorative shirt and described what it means to play 100 games for Real Madrid: “Obviously great joy and pride. I would like to thank my family, because they were the ones who fought to make this happen with me and now I want to enjoy it with my family and friends, and everyone at Real Madrid. Hopefully we can win the league and a lot more silverware for them in the future. I always try to give my best. You have to honour this badge with pride and respect”.

His aims
“My aim is to win everything I can and if that means winning the next 100 games then that’s what I’ll try to do. I want to give 100%, do my bit for the team and be able to give my best for this badge so that I can win a lot of trophies. You have to fight to the end. Whoever emerges as champions, you always have to fight to the very end, fight to the death. You have to give everything you've got. We'll look to win on Sunday and hope results go our way so that we can go into the final matchday with a good chance”.

Valverde's achievements
The midfileder has won 1 Club World Cup, 1 LaLiga title and 1 Spanish Super Cup with the club. His 100 appearances have come spread across four competitions: LaLiga (71), the Champions League (17), Copa del Rey (9) and the Spanish Super Cup (3). Last season saw him make his most appearances in a single campaign (44), while he’s played 31 times so far this term, netting three goals. 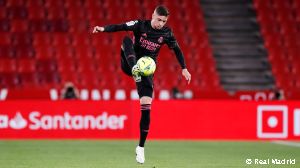