With 32 wins in 33 games, the league leaders want to make sure of first place in the regular phase and better their all-time best campaign (6:30pm CEST).
Now fully focused on the league, Real Madrid have several targets still to his in this season's competitions. With just three games to go until the end of the Regular Season, the leaders welcome tough opposition in the form of Valencia Basket. Laso's men are just one win away from making mathematically certain of first play, giving them home-court advantage in the play-offs. The team is also on course to break the record for most wins in a Regular Season, currently sitting level on 32 with the 2013-14 Madrid side.

It's sure to be a tough test of the league leaders' remarkable run, after they have picked up 18 consecutive wins to remain unbeaten in 2021. Valencia Basket, who are pushing to finish among the top four, have won their last five in a row. In the first meeting of the season, our team won 78-86 at La Foneta thanks to a spectacular first-half display (50-25) led by Carroll, Abalde and Thompkins.

The head-to-head across all competitions this season reflects absolute equality, with two wins for each team. The league and the Copa del Rey quarter-finals went the way of the madridistas; while the Valencian side came out on top in both Euroleague encounters. Real Madrid have won all of the last ten league meetings between the two. Ponsarnau's team are real point-scorers, with some of the championship's highest three-point, two-point and free-throw percentages. Laso's men will have to take advantage of what has thus far proved Valencia's weak point - their defense, where they concede an average of 81 points. Poirier, averaging 9 points, 6.3 rebounds and a PIR of 11 in his three games, and Garuba (10 points 9.6 rebounds and PIR of 17 in the last five) will be key in stopping a potent interior of Dubljevic, Tobey, Williams and Labeyrie.

Most wins in a League Regular Season
Real Madrid could be set to break the record for the highest number of wins in an ACB Regular Season. They currently share the record with the Real Madrid team of 2013-14, who managed 32 wins in the old 34-game format. The leaders certainly have lots to play for this evening as they return to the WiZink Center in the competition 21 days later. 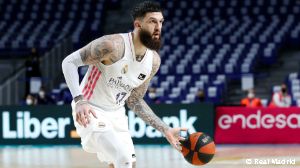