Zidane’s side are back on home soil to take on Betis in the first of six crunch matches in the fight for the league title (9pm CEST).
The fight for the league title goes into the final straight and Real Madrid are looking to take it to the wire. There are just six crunch matches left in the competition and Zinedine Zidane’s side face the first of them tonight when they welcome Betis, who sit in the Europa League places, to the Alfredo Di Stéfano (9pm CEST).

This fixture sees Real Madrid return to league action at the Di Stéfano 14 days after the side’s last match in the competition. The Whites’ last home game in the league was the Clásico win and they are on a run of five straight wins on home soil, eight games unbeaten (including seven wins) and have scored in their last 18. It will also be the seventh fixture for Madrid so far in this tough month of April, which the side will bring to an end on Tuesday against Chelsea in the first leg of the Champions League semi-finals (9pm CEST).

“We're ready to put in a big performance against a very good Betis team”, said Zidane in the press conference ahead of the match, which his side goes into on the back of a 16-game unbeaten run and three straight clean sheets. The Frenchman’s squad welcomes back Eden Hazard and Luka Modric. Karim Benzema, who bagged a brace and assisted a goal at the Ramón de Carranza stadium, has found the net in six of his last seven appearances at the Di Stéfano, which has seen the forward strike seven times.

Betis
The Andalusian outfit go into matchday 32 of LaLiga in a rich vein of form. The team’s impressive record reads as follows: five consecutive games without defeat (one win and four draws) and away from home they have only lost one of their last eight outings, picking up five wins in the process. Sergio Canales is the side’s top scorer, with ten goals, for Manuel Pellegrini’s side, who sit in sixth place in the table and are battling it out for a place in next season’s Europa League. 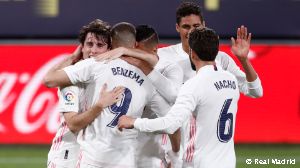