The academy side fail to pick up any points on the road and a place in the Segunda División play-offs looks unlikely.
Estadio Francisco de la Hera

0
Real Madrid Castilla lost in Extremadura (2-0) in the fourth game of this season's second phase. The academy side failed to take any points in a key clash for their Segunda División play-off hopes after the hosts went ahead on 26 minutes, before Rubén Mesa doubled their lead in the second half.

There were barely any chances of note in the opening stages of the game but with 17 minutes on the clock, the hosts came close to taking the lead following a vicious Elías cross. Soon after, Extremadura did open the scoring through Kike's powerful drive from outside the box. Castilla responded swiftly, and Latasa could have levelled things but his header flew just over the bar. Kike then had another chance to extend the lead before the break.

Extremadura make sure
Raúl's men pushed forward after the restart and quickly claimed a penalty on 49' for a Kike handball. Despite the visitors' reaction, Extremadura hit back and had two good opportunities to find a second goal. They continued to put the pressure on and with 71 on the clock, Rubén Mesa made it 2-0. With 11 minutes to go, Hugo Vallejo could have cut the deficit following a fine team move but Jilmar cleared the ball off the line. The academy side continued to go for goal but to no avail as Extremadura held on to the end. 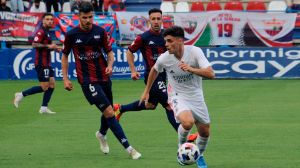