Real Madrid secured the league crown following a 2-1 away win over Zaragoza.
Today marks the 64th anniversary of Real Madrid's fifth LaLiga title triumph. On 14 April 1957, our team mathematically secured the league honours after running out 2-1 winners over Zaragoza at the Campo de Torrero on the penultimate matchday. The madridistas had to come from behind after Wilson put the Aragonese outfit in front in the 9th minute and Mateos duly bagged a brace, finding the net on 35' and 70', to lead the team to glory.

Real Madrid finished that 1956/57 LaLiga campaign with a five-point advantage over second-placed Sevilla and Barcelona in third. In the individual stakes, Alfredo Di Stéfano's 31-goal haul saw him top the division's goal charts. That madridista squad, which was coached by José Villalonga, went on to lift three pieces of silverware in that season, after also picking up the European Cup and the Latin Cup. 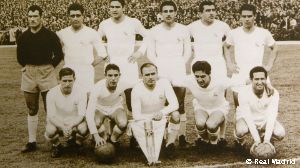