The team secured league glory on 13 April 1964 after downing Águilas in a 63-71 win.
Fifty-seven years have passed since Real Madrid secured the club's seventh league title. On 13 April 1964, our team mathematically secured the crown after beating Águilas in Bilbao (63-71) with one round of games to go. Joaquín Hernández's men ended the league season with a record of 19 wins and three defeats.

That edition of the league season saw the competition divided into two parts. First of all, the Regular League was split into two groups, with Real Madrid the top-performing team in Group A. The final phase, contested between the top three teams in each group, saw the madridistas come out on top with one round of matches remaining. Emiliano Rodríguez was the Whites' top scorer that seson, with an average of 22.6 points per games. Real Madrid captured the league title for a fifth straight year, before lifting the club's maiden European Cup crown at the end of that season. 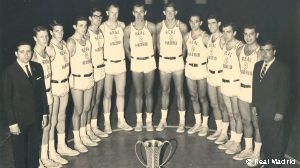